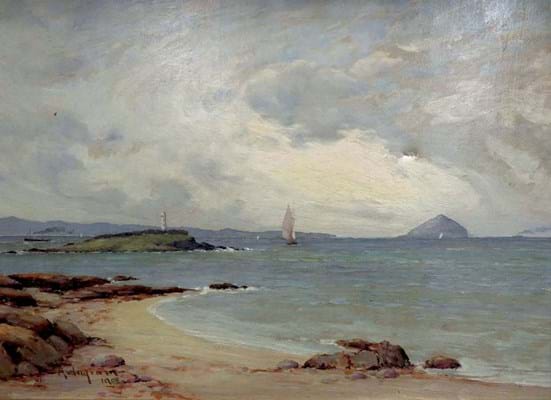 The January 9-10 sale at East Bristol Auctions includes a Victorian horn snuff mull with repoussé silver and cut stone cover and a terminal carved as a seal’s head.

This 14 x 12in (34 x 30cm) oil on canvas above by Newlyn School artist William Ayerst Ingram (1855-1913) dated 1908 was painted on the Isle of Arran in Scotland. It takes as its subject the southern tip of the island looking towards the 18th century Pladda lighthouse. The estimate is £200-300 at Bolton Auction Rooms on January 15.

A 9in (23cm) high ribbed shoulder vase made by Wedgwood to a design by the New Zealand-born architect Keith Murray (1891-1981) carries an estimate of £40-60 at Brighton & Hove Auctions in Brighton on January 10.

Murray first began working for Wedgwood in 1932 and in 1936 was appointed architect in charge of designing the new factory at Barleston.

A 7in (18cm) novelty silver eight-day mantel clock modelled as an Edwardian car headlamp carries an estimate of £400-600 at Clarke’s Auctions in Shaftesbury, Dorset, on December 28-29.

Take a tour of 103 European cities