Guangzhou bracket example leads a selection of stand-out timepieces sold in the regions. In his book English Clocks for the Chinese Markets Ian White describes the emperor Qianlong (1735-95) as “simply the greatest collector of Western clockwork there has ever been”.

Many of the magnificent clocks made by English clockmakers that entered the imperial collection (there were estimated to be more than 4000 of them) were later copied in the Guangzhou workshops.

The 15in (37cm) ‘scroll angle’ case embellished with brightly coloured enamels and paste gems is a type often used by London makers Henry Borrell and John Mottram in the 1780s.

Thought to date from the 19th century, this Guangzhou copy was estimated at £2000-3000 but went to a UK collector against two Chinese competitors at £18,000.

Similar works made by Borrel himself for the Eastern market, particularly those with musical movements so favoured by the Chinese, can make considerably more.

Five lots hit the five-figure mark. Four of them were taken for 19th century timekeepers. Two were carriage clocks by James McCabe of the Royal Exchange. Across almost a century of production (1781-1879) McCabe father and sons produced an estimated 7000 clocks, 500 marine chronometers and 50,000 watches, many of them ranking in quality with those by Frodsham and Dent. One of the carriage clocks offered here was a ‘giant’ size in a gilt-bronze ‘four glass’ case around 9½in (24cm) tall. It bore the engraved signature James McCabe Royal Exchange London No. 2938 to the heavily engraved silver dial and backplate for c.1860. The twin-train chain fusee movement struck the hours and included a repeat button. This clock, with its original numbered key, had been bought from the Tonbridge dealer Derek Roberts and was pictured in his book Carriage and Other Travelling Clocks (1993), a signed copy of which was included in the lot. It sold to a private buyer at the top-estimate £18,000.

A four-glass, quarter-striking giant carriage clock was signed Alexander Guillaume, London, No. 861, but was probably also made in the McCabe workshops. It may have been commissioned for a client by the immigrant Swiss watchmaker.

The 11in (28cm) tall case, with cast foliage and bronze-lift out back, enclosed a similarly complex twin-train fusee movement. It sold to a collector at a lower-estimate £15,000.

The 18in (46cm) high, bell-top case had a knopped brass carrying handle and pierced and engraved brass panels to each side. Over the years, the movement had undergone some restoration (the anchor escapement and the pull wheel were later as probably was the strike-silent ring to the dial) and there were also some losses and restoration to the case. However, these are the norm for a 300-year-old clock. There was a strong northern bias to a collection of clocks sold by Tennants (20% buyer’s premium) in Leyburn on November 16.

The auction offered the first tranche of the 300-strong group owned by Eric Morton (1945-2019), a former Durham miner who became a published authority on northern English horology.

He favoured pieces from his native north-east but the top-seller was from the north-west: a musical eight-day longcase clock signed Hugh Lough Penrith 1773. The 8ft 1in (2.47m) tall clock was one of around only 20 documented works by Lough, many of which are 30-hour brass-dial examples, and this one appears to have been his masterpiece.

As well as its eight-day, three-train movement and 7ft 10in (2.39m) high mahogany ‘Chippendale’ case, the brass and silvered dial included a lunar equation, a solar rise and fall, and a subsidiary dial to the arch for annual saints’ and feast days. Incorporating 13 bells, the movement also allows for the playing of 14 different tunes, one every six hours if so desired.

It sold to a northern English private buyer just above estimate, at £9500. However, this was the same clock that (for many years owned by the Lough family) made £19,000 at Mitchells of Cockermouth in 2013.

An outer calendar chapter to the 15in (38cm) one-piece silvered brass displayed the date and signs of the zodiac and the arch featured a moonphase aperture.

The 7ft 11in (2.42m) mahogany case, enclosing a weight-movement with an anchor escapement and striking on a bell, had suffered some cracks and chips and the trunk glass door was cracked but the clock went to a US buyer comfortably above estimate at £6000.

The Tyneside fishing port of North Shields also featured in Morton’s collection, most notably a c.1730 ebony veneered quarter chiming table clock signed Jos Green, North Shields to the 8in (20cm) arched brass dial, which went to a northern collector within estimate at £5500. 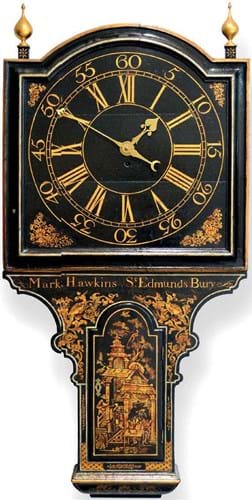 One of the better sellers from the collection was a mid-18th century drop-dial tavern clock, a large example at 5ft 2in (1.58m) tall, in a japanned case signed Mark Hawkins, Bury St Edmunds to the trunk. It featured typical gilt-painted pagodas, figures birds and flowers. The clock had been restored, but to a high standard and so long ago that there was some fading. Against a £2500-3500 estimate the clock sold to a collector at £7000. Top-seller, from another vendor, was the 21in (55cm) quarter-striking table clock signed to the 7in (18cm) arched brass dial Hindley York. Henry Hindley was a renowned maker in the city where his works included a c.1750 clock for York Minster and a table clock with twin-chain fusee movement, deadbeat-type escapement, going train and maintaining power – now in the city’s Fairfax House museum – almost identical to this example. It was pitched at £6000-8000 and sold to an Australian bidder at £11,000. While local appeal can boost the price of a clockmaker, family pride is even better as Hampshire auction house Hannam’s (23% buyer’s premium) was happy to confirm.

A 20in (50cm) ebonised George III ebonised bracket clock included in the marathon 3000-plus lot sale at the Selborne rooms on November 11-13 was catalogued as by Thomas Washbourn, London. His is not a famous name among the clock collecting fraternity although he is recorded working in London before 1744 until his death in 1756.

It is, however, well known to the Washbourn family and a descendant using thesaleroom.com’s lot alert facility discovered this item pre-sale.

The clock had been converted from a verge movement during the 19th century and needed an overhaul but was in generally good condition. The family member secured it with a double top-estimate bid of £6000. At Gorringe’s (21% buyer’s premium) sale in Lewes on December 3 a mid-19th century longcase regulator, signed to the 10in (25cm) square silvered dial EJ Dent of Strand, London, was offered.

In a typically plain, 6ft (1.84m) mahogany case enclosing a high-quality single fusee movement with anchor escapement, it was estimated at £4000-5000 but sold at £12,000 to a buyer using thesaleroom.com. John Pace (1783-1867) was born in Whitechapel and hailed from an eminent Quaker family of clock and watchmakers who had been in London’s East End since the 1630s. However, by 1804 he is recorded as working in Bury St Edmunds – later, more specifically, at 19 Abbeygate Street from 1823-55.

In a town bristling with renowned clockmakers, Pace had a reputation for inventiveness and quality work. At the peak of his powers in the 1850s, he exhibited three pieces at the Great Exhibition including a skeleton clock which ran for three years on just one winding.

This 18in (40cm) high year-going clock of a similar date, signed to the front John Pace Bury St Edmunds, has twin chain-driven fusees each with two spring barrels with subsidiary rings for rings for the date and the weeks of the year.

It found its way into the collection of Joseph Maumus Meraux (1922-92), a Louisiana landowner whose clock collection was sold at Sotheby’s in 1993, but has since been in Suffolk. At the other end of the date range was a brass quarter-striking lantern clock with the front fret engraved Eduardus East Londini offered at Canterbury Auction Galleries (20% buyer’s premium).

Edward East (1602-97) was a major influence for much of the 17th century: a clockmaker to Charles I and who lived long enough to work for Charles II during the ‘Golden Age’ of English horology.

The piece at Canterbury on November 27 was dated c.1680 – the so-called Third Period of lantern clock making.

Standing 16in (40cm) tall, it had a 6½in (16.5cm) diameter silvered chapter ring featuring a central silver alarm disc engraved with a Tudor rose.

The movement had some alterations and the glazed winged apertures to the side doors with pierced and engraved crestings were later.

The clock sold to an Essex bidder just above estimate at £8200.