The highlight of Theriault’s (15% buyer’s premium) July 22 Marquis antique doll auction in Nashville, Tennessee, was an 18th century carved English wooden doll which soared to a multi-estimate hammer price of $135,000 (£108,000).

Known as Miss Timber, the carved, jointed and painted costumed doll, which dates from c.1735, was of especially large size at 2ft 3in (68.5cm) high and in a particularly good state of preservation.

She was wearing her original costume of an elaborate brocaded silk dress embellished with silver beading and thread and a lace fichu, a delicately embroidered muslin apron and a reticule and a feather trimmed hat. The doll was accompanied by a wooden box containing a handwritten label inscribed with her name.

The doll’s provenance can be taken back to the 18th century when she belonged to a Miss Mabel Gurney, daughter of Sir Somerville Gurney and Lady Harriet Hay.

In the late 18th century Mabel packed her doll, taking it with her to Cullard’s Grove when she married Sir William Curtis, the son of a sea-biscuit manufacturer and a prominent politician.

The doll passed to Mabel’s daughter Connie and on through subsequent generations until acquired by a collector from the family over a decade ago.

A number of dioramas and model shops attracted keen interest in the June 15 sale of toys and held by Pook & Pook in Association with Noel Barrett (22% buyer’s premium) in Pennsylvania.

One was a detailed model of a butcher’s shop which came complete with an impressive array of carcasses, two counters and two butcher figures set against a brickwork ground and contained in a hinged metal case. It measured approximately 21in (53cm) square and was pursued to $7500 (£6000), well over the upper estimate of $5000.

A smaller and simpler but well-preserved 8 x 11in (20 x28cm) version featured a pedimented shop front with a display of cuts of meat in the window and a figure of a butcher in the open doorway standing in front of his butcher’s block with a cat at his side. Despite the inscription Butcher D Cairns Poulterer, this was reckoned by the auction house to have been made in Germany. It sold for $1300 (£1040).

The tinplate toy section of the auction included a clockwork Alfa Romeo racer by the French firm CIJ. This sought-after inter-war model of a racing car has a wealth of well-finished details such as Michelin tyres, a handbrake lever and operable steering and came with a contemporary figure of a driver. It sold for $5000 (£4000). 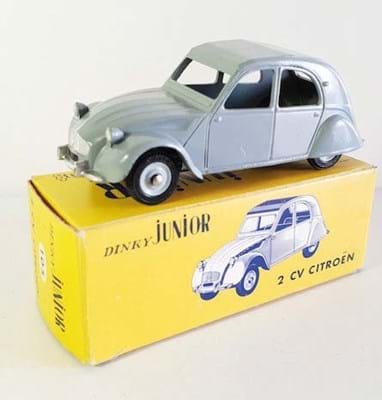 One of the highlights of the diecast and other toys auction held by Ivoire Nîmes (22.2% buyer’s premium) on July 4 was a clockwork lithographed motorcyclist made by Mohr and Krauss of Nuremburg c.1900. Powered by a flywheel, the 8in (20cm) long blue antique toy sold for €4500 (£4090).

The 1961 Citroen 2CV is a rare model from the Dinky Junior series and a boxed example offered at Ivoire represented an opportunity to acquire one in its unused state. It sold for a mid-estimate €1250 (£1135).

This is a rare survival as a complete set and apart from two doors on one wagon being reattached and repainted, it was in pristine condition complete with a wooden case to house the pieces. Among a group of early French Fernand Martin clockwork toys described by the auction house’s Jeanne Bertoia as “a global collectable” particularly keen demand emerged for a couple of well-preserved examples.

The latter, described in the catalogue as “one of the many nationalist guards to come out of the Martin factory”, sports a full cloth uniform and rifle and is similar in appearance to the Russian guards.