A Mannerist bronze after Giambologna and a rediscovered oil sketch by Peter Paul Rubens posted seven-figure sums during the series of sales coinciding with the Salon du Dessin fair in Paris. The original marble for Allegory of Architecture, a seated nude holding a plumb line and set squares in her right hand, is dated 1565 and in the Bargello, Florence. The most common versions in bronze were made without the ‘tools’ but this example, probably cast by Antonio Susini in Florence c.1580-90, retains them.

The bronze was heightened in lamp black during the 19th century in the fashion of the time but it retains an original dark brown patina. Its century-long provenance included its sale in Paris in 1922 for Fr31,000 and its acquisition at auction in 1962 by Fernand Lafarge, a descendent of the founder of a leather goods company based in Amiens.

Meanwhile, the 17 x 18in (43 x 46cm) oil on panel by Rubens offered in Lille had been found in northern France.

One of 39 sketches produced for the decoration of the ceiling of church of the Jesuits in Antwerp, it depicts St Margaret triumphing over evil. The artist was commissioned in 1620 after his return from Rome, where he had seen and admired the ceilings produced by Veronese. 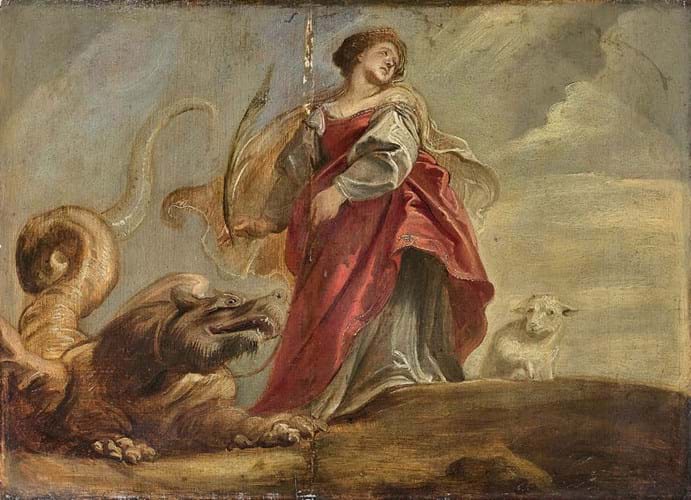 New president of ABA the ‘first from north of Watford Gap’

Weiss settles out of court in ‘fake’ Hals case