Chinese material beyond the headlining world of porcelain continues to boost totals across the UK’s salerooms, occasionally eclipsing estimates. Dominated as it was by the £100,000 Yongzheng plate (ATG No 2359), the September 8 sale at Hansons’ (20% buyer’s premium) Teddington rooms also had space for this yellow gold and green jade brooch above. Featuring a propitious bat carving, it was estimated at £250-450 but sold to a UK collector at £5500. 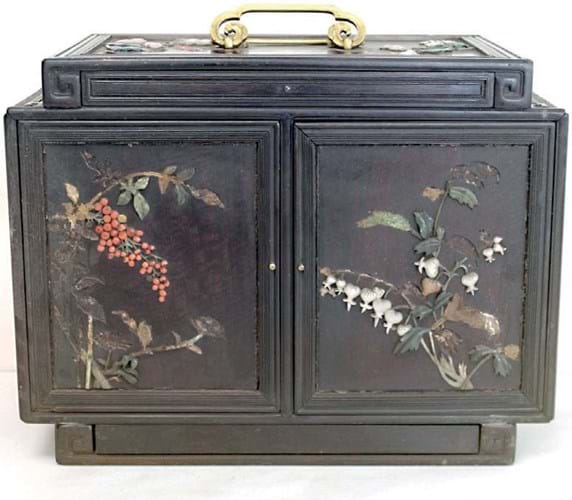 Estimated at £200-300, it needed restoration, but all one Chinese prospective bidder wanted was close-up images of the wood (auctioneer Steven Parkinson explained he could simply zoom in on the hi-res images). Satisfied that it was of the highly prized rosewood huanghuali, the caller went to £8000 to secure it. A collection of Chinese sold at Reeman Dansie for £7000.

Notoriously hard to age and estimate, the collection was pitched at £150-250 at the Colchester rooms on September 25 but went to a Chinese phone bidder at £7000. This pair of early 19th century sword breakers sold at Tennants in Leyburn for £5500.

One of the more unusual Chinese lots to come to any rostrum recently was this pair of early 19th century sword breakers offered at Tennants (20% buyer’s premium) in Leyburn.

In the European sense a sword breaker is a parrying dagger used alongside, for instance, a rapier. Chinese sword breakers, however, are what they say: heavy weapons with square-section, rather than sharpened, blades, traditionally used by elite troops to smash through an enemy’s raised sword.

They are generally made of steel with blades 3ft (96cm) and more long. The pair offered in North Yorkshire on October 5 were of bronze with 21in (55cm) blades. One theory is that they were used in the ceremonial breaking of a dishonoured soldier’s sword.