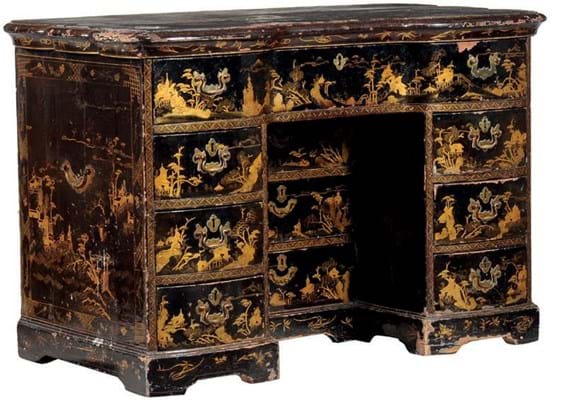 The attributes of two of history’s great adversaries, Nelson and Napoleon, are carved into two large ‘trophy frames’.

The 3ft 9in x 4ft 11in (1.16 x 1.5m) gilt gesso frames, containing Victorian prints of famous military scenes associated with the pair, will go under the hammer at Charterhouse in Sherborne on October 18-19.

Nelson’s picture frame (shown above) is decorated with a sailor, lion, sextants, cannon, hornpipes, flags and the stern of HMS Victory, while Napoleon’s has French Empire emblems, a cannon, drums, armour, muskets and his legendary bicorn hat (detail). The pair were displayed opposite each other in the hall of a 17th century farmhouse and have belonged in the vendor’s family for almost a century.

At the turn of the 20th century, a hoard of ancient Egyptian bronze objects was discovered in Memphis, Egypt, in a dig led by archaeologist and antiquities dealer Albert Daninos-Pacha.

The bronze objects had originally come from the ancient Egyptian city of Thebes where scholars believed they had been looted during the Persian invasion in 525BC. Daninos-Pacha’s discovery was broken up, with some objects going to The Museum of Egyptian Antiquities in Cairo and others sold on the art market.

An Islamic art sale at Roseberys London on October 22 will include a plaque from the hoard. Depicting Amenirdis I, a so-called ‘God’s Wife of Amun’ (the highest-ranking priestess of the Amun cult), the 11 x 3in (28 x 7cm) plaque dates to her years as high priestess in c.714-700BC during the Late Dynastic Period. Originally set in an offering stand or a similar piece of temple furniture, the plaque has been in a private collection in Switzerland since the 1960s and is guided at £600-1100.

Removed from a pub in north Somerset, a late Georgian curved pine settle from c.1830 in original off-white dry scraped condition is priced at £1650 from Sherborne dealership Macintosh Antiques.

The 5ft 7in x 4ft 8in (1.7 x 1.42m) piece will be going to the Bruton Decorative Antiques Fair, which will take place from October 19-21 in Somerset. More than 50 exhibitors will be dealing in decorative antiques and mid-century design with an accent on home furnishing and embellishments.

Selected contents from Kingstone Lisle Park, the lavish Grade II-listed Georgian country house in Oxfordshire, will go under the hammer in an interiors auction at Dreweatts in Donnington Priory on October 31.

The estate has been owned by the Lonsdale family since 1943, when banker Leo Lonsdale purchased it for £26,000. It was put on the market last year with an asking price of £19.5m. The majority of the items from the group belonged to Lonsdale’s wife Victoria. She was the great-granddaughter of Lord FitzRoy Somerset, himself a son of the 5th Duke of Beaufort, who served at both Waterloo and later in the Crimea where he was commander of the British troops.