First World War Armistice centenary: We will remember them

The centenary of the Armistice has been marked by the appearance of some poignant lots at auction revealing the human cost. 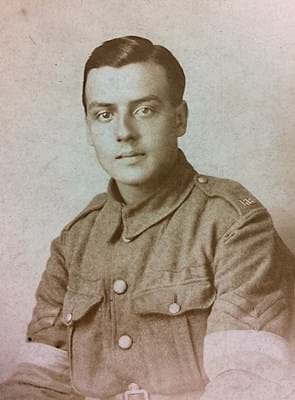 Hostilities will cease 11.00 today Nov 11th. Troops will stand fast on line reached at that hour which will be reported by wire to Corps HQ. Defensive precautions will be maintained. There will be no intercourse of any description with the enemy.

After more than four years of hard fighting, the First World War was over. For British units on the Western Front, this momentous news came via a message form worded as above, or similar.

Among a handful of dedicated auctions, other salerooms held regular sales with sizeable Great War sections, all held to coincide with the Armistice centenary. Many poignant lots have come to light marking the day this long and arduous conflict finally ended. The celebrations get into full swing as the Armistice is announced on November 11, 1918. Workers flock out of factories, employers and employees leave their desks while sirens scream and whistles sound, to flock to town halls and public centres to celebrate victory. (Photo: Alamy/Chronicle.)

A remarkable lot on offer at Christie’s on December 12 is an eyewitness account of the actual negotiations that led to the Armistice.

It involved a restricted group of participants, comprising seven on the Allied side and six on the German side, including translators. For the three days of discussions, all were living and working in a pair of French military trains in a clearing of the Forest of Compiegne behind French lines.

The Allied group was headed by Marshal Foch, with Admiral Wemyss the senior British representative and head of the naval delegation.

British naval officer Captain Jack Marriott, aged 38, was attached to that delegation – one of only four British participants – and it his detailed accounts of this moment in history which are on sale at Christie’s estimated at £10,000-15,000 in the Books and Manuscripts auction. They were consigned by a private UK collector.

Marriott’s account fills in some lost details of history: like the fact that the Great War was prolonged by a whole day because the German party had failed to bring a code with them by which they could send the armistice terms back to headquarters.

Instead the papers had to be sent back across the front line by motorcar, a process which took 36 hours. When Marriot tried to call Buckingham Palace to inform King George V that the war was over he was almost defeated by the telephone: “The line was dreadful and I must have been cut off about 30 times.”

It had been immediately clear to the Allied party that the German delegates, caught between absolute military collapse on the front and starvation and revolution at home, would accept almost any terms. And so, after three days, at 5am, Marchal Foch, Admiral Wemyss and the four German delegates signed the document which declared an end to the war. The guns would fall silent exactly six hours later, at 11 o’clock on the eleventh day of the eleventh month of 1918.

Marriot’s memoir ends on a note of calm understatement: “We then had a glass of port and went for a walk in the Forest which was wonderfully soothing after our busy night.”

Once the Armistice was signed, the official ceasefire announcements could begin.

At one level, it came in the form of an original Buckingham Palace public notice to confirm the conflict was over, offered at Wiltshire auction house Henry Aldridge (24% buyer’s premium), estimated at £8000-12,000 and sold for £21,000.

Typed on embossed Palace card, 7½ x 9½in (19 x 24cm) dated November 11, 1918 and with Royal Coat of Arms, it reads: ‘The Armistice with Germany was signed at 5am this morning. Hostilities will cease upon the whole front at 11am today.’

On the front itself, many of those original ‘cease hostilities’ message forms would have been taken home as souvenirs and several have resurfaced 100 years on in auctions. Bosleys (20% buyer’s premium) of Marlow offered two examples in the November 7 sale, both estimated at £150-200 and sold at £600 each.

One created for the 61st Division was later acquired by Corporal Frederick Lewis who served with the East Lancashire Regiment (which joined the division in June 1918) and then the Labour Corps. The message form was sent by advanced 17 Corps to 61st Division and received at 7.18am on November 11.

It came with Lewis’ Victory Medal and other items such as a brass 1914 Princess Mary tin.

The other form was for the 18th Division, 54th Infantry Brigade, from 13th Corps, with the same message as noted before, received on this occasion at 8.48am. Corporal George Charles Goulding of the Signals Section, a despatch rider who delivered the message to announce the end of hostilities. That original message and other items owned by Goulding are now on offer at Hansons’ auction estimated at £100-150.

Coming up this week, on November 22, Derbyshire auction house Hansons is offering another example, sent to the 59th Division.

It belonged to Corporal George Charles Goulding. Charlie, as he was known, served in the Signals Section in France during the war and was despatched on his motorbike to deliver at 9am the most important message of all – the order to end hostilities.

The message form will be sold alongside other personal items such as Charlie’s British War Medal and Victory Medal, wartime photos and a tin containing pictures of his wife, Mary – known as Minn – who served in the Dublin Red Cross.

The ‘A’ form messages and signals note reads: Hostilities will cease at 1100 today Nov. 11. Troops will stand fast in present positions. 178th Brigade will continue to hold outpost position until units of 74th Div. have established line further East and in front of them. Touch will be gained with flanking formations. Line to be reported to DHQ. Precautions will be preserved and there will be no communication with the enemy…

The anonymous vendor says: “Charles was my late husband’s grandfather. He was from Porthill, Newcastle-under-Lyme, Staffordshire. He was stationed in Dublin for a time, where he met Mary, or Minn. She was a Roman Catholic girl and marrying an English soldier did not go down well with her family.

“After the war he became a mining engineer and settled in Audley, near Newcastle-under- Lyme. He married Minn in 1920. Sadly, Charles died at the age of 52 due to a severe asthma attack. My husband inherited the items.

“I often wonder how Charlie came to keep the message. I think he must have handed it to the officer in charge, who read it swiftly then unthinkingly gave it back to him. Such was the enormity of the moment.”

This collection of wartime memorabilia is estimated at £50-100.