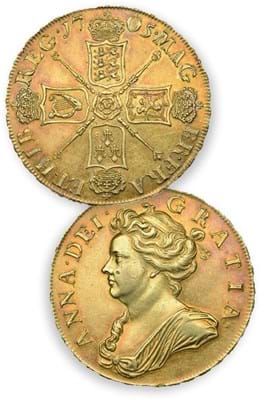 A René Lalique belt buckle dating from the famous glass maker’s early career as a jeweller and will go under the hammer at Tennants on November 17 in Leyburn, North Yorkshire.

The silver and gold buckle, modelled in the form of a female face with flowing hair and a blue enamel headband, featured in an episode of BBC Antiques Roadshow broadcast in April.

The vendor had been gifted the buckle by her uncle’s great aunt, who had moved to the UK from France in the 1890s and had worn it throughout her nursing career.

British and Irish milled coins owned by the Berlin dealer and collector Michael Gietzelt and valued at £575,000 will be auctioned by Dix Noonan Webb in London on November 14.

The collection comprises almost 400 lots and includes coins from the reign of Charles II through to the 20th century.

Coins predating the 1707 ‘Acts of Union’ joining England and Scotland are the rarest of Queen Anne’s reign. It is believed that only 18 examples of the 1705 Five Guineas have been traded on the numismatic market over a 45- year period dating back to 1960.

A remarkably well preserved 2000-year old Chinese crossbow with its mechanism still intact will be offered at Cambridge saleroom Cheffins on November 8.

According to the auction house, this is the first time a wooden example like this will be offered on the open market.

Dating from the Han dynasty, the ancient crossbow is a smaller example to the one found by archaeologists in 2015 during excavations of China’s Terracotta Army. With a range of over 850ft (260m), the crossbow was a huge technological advancement in ancient China and an essential weapon on the battlefield.

Guided at £15,000-20,000, the weapon has been consigned from a Hong Kong-based collector who bought it from a private collection in Taiwan.