German and Swiss sales on a roll

Old Masters and post-Impressionist paintings, vintage luggage and the almost inevitable Asian artefacts all appeared among the best-sellers in the recent round of auctions held across Germany and Switzerland. Asian works caused the biggest stir in Heidelberg where Metz (25% buyer’s premium) offered a monumental selection of works of art on March 23-24.

Almost 2400 lots from a family collection that had been amassed over several generations were offered without reserve and the sale attracted bidders from all over the world, leading to some fireworks.

Keen demand emerged for a seated figure of the Buddhist deity Manjushri, waving a sword. The 3ft 1in (95cm) high gold and red lacquered wooden figure was Chinese and could be dated to the 17th century. The lively contest ended at €168,000 (£148,670), when a bidder from Hong Kong outpaced his international competitors.

The penultimate lot of the sale, a pair of partly gilt bronze figures of two 2ft 4in (70cm) high standing Buddhas on lotus bases, was taken to €135,000 (£119,470), providing an appropriately upbeat conclusion to the sale’s proceedings.

Just over a week earlier at Hargesheimer (25% buyer’s premium) in Düsseldorf, the sale of three works in the March 15 Asian art auction was highly auspicious for consigner and auctioneer alike. They were from a long-standing local collection and were enticingly estimated.

Top of the list, however, was a 9in (24cm) high blue and white porcelain vase, decorated with the Eight Auspicious Symbols of Buddhism, among them the parasol, two golden fish and the eternal knot. This time the bidders went to €240,000 (£212,390).

The vase was originally thought to be early 20th century but was referred to post-sale as c.1800. The pedestal is now believed to also be c.1800 and the panel as 19th century.

The emphasis was very much on works by Swiss artists and these brought the highest prices.

There was major interest for works by the post-Impressionist painter Marius Borgeaud (1861-1924), who was represented by six works from the collection of Jean Claude Givel who died in 2015.

All of them found buyers; the biggest surprise was the result for his late work Intérieur à la table rouge, a 21in x 2ft 2in (54 x 65cm) canvas, painted in 1923, one year before the artist’s death.

It is a variation of the Intérieur aux deux verres from the same year which belongs to the Musée Cantonal des Beaux-Arts de Lausanne. 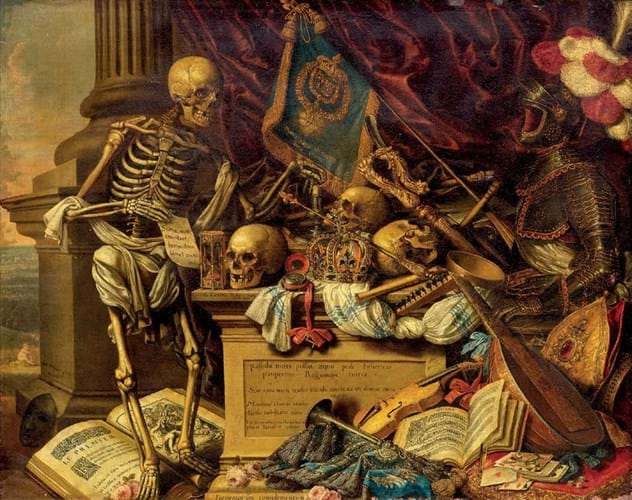 It seems that almost every sale of Old Master paintings contains at least one major sleeper and the March 23 sale at Koller (25/20/15% buyer’s premium) in Zurich proved to be no exception. The biggest turn-up for the auction books was the result for Memento Mori Still Life by Carstian Luyckx (1623-c.77), which was recently discovered in a Swiss private collection.

The Flemish artist, who spent much of his career in France, was renowned for his many types of still-lifes, from sumptuous floral arrangements to the vanitas motifs.

The 2ft 5in x 3ft 1in (74 x 93cm) canvas in Zurich was a particularly elaborate composition with a multitude of skulls, musical instruments, books, a skeleton, a suit of armour and a regal crown.

Numerous details such as fleur-delys motifs, a standard with the coats-of arms of Bourbon-Navarra, flanked by the chains of the orders on St Michael and The Holy Spirit, are all thought to be allusions to the French King Louis XIV and a comment on his expansionist foreign policy.

The auctioneers underestimated the demand and the hammer fell at a substantial SFr450,000 (£328,470), 15 times the lower estimate.

Toyoharu’s powers of perspective evident from album offered in Zurich