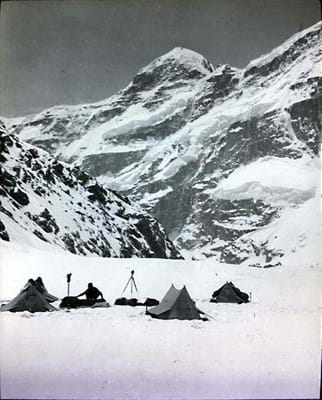 Robert – immortalised in Alexandre Dumas’ Count of Monte Cristo, as the artist of a fictional portrait of a character in the book – painted a number of studies of Italian life while working in Rome on a series of works depicting the four seasons. Charles X of France bought one work, Summer Reapers arriving in the Pontine Marshes, which now hangs in the Louvre.

An early work by Laura Knight (1877-1970) painted during her time in the Yorkshire fishing village of Staithes will feature in David Duggleby’s sale in Scarborough on March 23.

The first group of 82 boxed magic lantern slides were taken by the British mountaineer Frank Smythe (1900-49) during the successful summit of Mount Kamet in the Himalayas in 1931 – the highest peak ever climbed at that time.

Estimated at £800-1200, the slides depict the local scenery, expedition members and sherpas, as well as the mountain itself.

This 19th century ‘ship cloth’ palepai from Indonesia is included in a tribal art and natural history sale at Chiswick Auctions in London on March 27. These mysterious cloths were made during the 18th and 19th centuries, but their significance and use remain a matter of conjecture.