An Old Master painting hung in the spare bedroom of a family home in Oxfordshire sold for a surprise £440,000 (plus 20% buyer’s premium) at Holloway’s of Banbury. 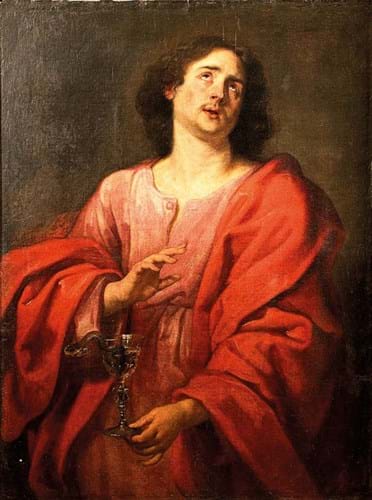 Catalogued simply as ‘19th century, Continental School St John the Evangelist and the poison chalice’, bidders on February 28 are thought to have deemed the work to be northern European, with an early to mid 17th century date and a possible connection to Anthony van Dyck (1599-1641).

Holloway’s furniture specialist James Lees admitted he was “slightly embarrassed” by the estimate of £400-600, although he noted it was two interested parties in the room that pushed the price into six figures, following early bidding from three phone lines.

Among those believed to be bidding was dealer Philip Mould.

The picture, known to the owners as Christ the Redeemer, is believed to have been in the same family since before the 1890s.

The family had a number of pictures stacked up in their home and were selling items as part of a clear-out. They had no idea of its value and are said to be “still in shock”.

The 3ft 6in x 2ft 6in (1.06m x 78cm) oil on canvas bears a distinct similarity to a painting sold at Sotheby’s Amsterdam in 2000 which was catalogued as by a follower of Peter Paul Rubens.

The price for the painting provided the bulk of the £660,000 sale total at Holloway’s.

The consignment of around 60 lots also included a pair of George II walnut library armchairs that sold for £35,000.