A selection of stand-out items that dealers will have on offer as part of Asia Week New York (AWNY).

These two rare carved hinokiwood guardian figures of a dog and a lion from the Kamakura period are priced in the six-figire category by Kyoto dealer Hiroshi Yanagi.

The dealer from Kyoto, Japan, brings a selection of Japanese works of art to show at the Aradar Galleries on 1016 Madison Avenue.

The selection will include these two rare carved hinokiwood guardian figures of a dog and a lion from the Kamakura period that are dated 1315.

The statues are priced in the six-figure category. There will be Mughal works and paintings from the Indian, Pahari and Rajput schools and from south India priced from around $15,000-150,000.

The Mughal works include a newly discovered portrait of the emperor Jahangir while from the Punjab Hills is a c.1825 Kangra court painting in the style of the much coveted artist Phuruku depicting Radha and Krishna sheltering under a parasol from a night storm.

From southern India comes this portrait of Tipu Sultan, the so-called Tiger of Mysore, a reference to the ubiquity of tiger motifs at his court. The 13½ x 9½in (35 x 24cm) portrait in opaque pigments and gold on paper dates from c.1820-30 and is a later stylised variant of the small oil in the India Office collection and the Company-style portrait in the Victoria & Albert Museum, London.

It shows Tipu seated on a European-style chair dressed in a tiger-striped garment with attendants standing behind waving chowries. This Chizou meiping from the 12th-13th century carved to the body with a band of scrolling peony is on sale at AWNY from Michael C Hughes priced in the $100,000 range.

On display will be a selection of Chinese ceramics and works of art plus a smattering of Korean pieces. One of his stand-out Chinese ceramics is this Chizou meiping from the 12th-13th century carved to the body with a band of scrolling peony.

Over the past year it has undergone extensive cleaning and restoration “returning it to something like its former glory”, says Hughes, adding: “Its relatively low asking price, in the $100,000 range, reflects its judiciously repaired condition.” 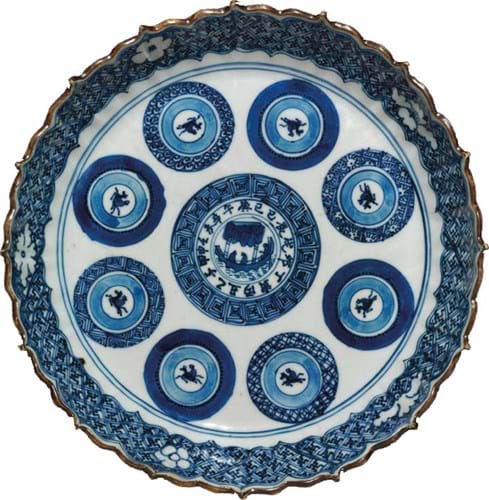 This 17th century Chinese Shonzui bowl made for the Japanese market is available from New York dealer Kaikodo priced at $25,000.

Parallel Lives, the exhibition mounted by the New York dealer Kaikodo, compares Chinese and Japanese works of art across several categories in its gallery at 74 East 79th Street.

One of the star pieces is this 17th century Chinese Shonzui bowl made for the Japanese market.

The 9in (22.5cm) diameter bowl is decorated in underglaze blue with multiple geometric patterns, calligraphic inscriptions and figures riding donkeys. It is of a type rarely seen outside Japan and priced at $25,000. Exotic Mirror: In the Eye of the Other, and Other Stories is the title of the exhibition that Alexis Renard from Paris will mount at Tambaran Gallery, 5 East 82nd Street for AWNY.

It will include this 18th century Mughal miniature, depicting the French monarch Louis XIV. The 4 x 5in (10 x 12.5cm) painting in gold and pigments on paper is a good example of European influences on Indian miniatures and was probably based on a European print. This rare Hongshan Culture ornament from c.3800-2700BC is on sale from New York dealer JJ Lally at AWNY.

Ancient Chinese jade is under the spotlight at New York dealer JJ Lally’s gallery at 41, East 57th Street during AWNY. The gallery is showing a large collection that spans the Neolithic through to the Han period.

“The items came from a collection in Europe. The collector chose item-by-item and bought at all levels over approximately 30 years,” says the gallery. Drinking vessels, small ritual objects and ornaments all feature in the show. The price range is from $500-2m.

The collection is rich in early Neolithic jades such as this rare Hongshan Culture ornament from c.3800-2700BC shown above. The 4½in (11cm) plaque of polished translucent pale greyish green stone is carved on both sides with an abstract mask. ‘Eyes’ drilled through small recesses flank a tapered ‘nose’ above a long row of blunt ‘teeth’ and curled ‘fangs’ and ‘horns’.

Among the many regular events timed to coincide with AWNY is the annual exhibition held by the Japanese Art Dealers Association (JADA).

This is a collaborative show by five New York specialists: Erik Thompson Gallery; Mika Gallery; Sebastian Izzard; Koichi Yanagi and Leighton R Longhi. It is staged at the Ukrainian Institute of America at 2 East 79th Street from March 17-18.