"He had taken a taxi from Heathrow to Easingwold. After fierce bidding on the phones and internet he bought it, put it in his suitcase and the taxi was still waiting outside the saleroom with the meter ticking to go back to Heathrow.” 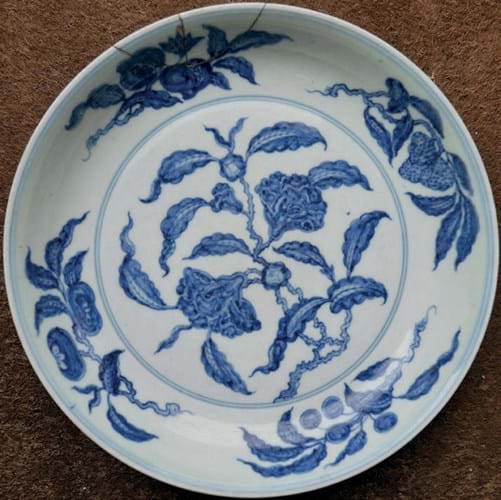 This was Tim Summersgill, owner of Summersgill Auctioneers, speaking about a buyer had come to North Yorkshire from Japan for the sale of a blue and white porcelain dish, believed to be from the Ming period.

The auctioneers had catalogued the dish, with a staple repair to the rim, as 19th century and expected it to sell for under £300 at a general sale on May 12. However, interest in the run-up to the auction had included a commission bid of £13,000.

On the day, it took more than 100 times its estimate and sold to the buyer who had flown in for the sale.

The decoration includes a branch of flowering pomegranate to the centre and four fruiting branches including peach, lychee, persimmon and cherry blossom to the cavetto. Written in a horizontal line under the rim is a six-character reign mark for the emperor Chenghua (1465-87). A handful of other Chenghua-marked dishes of similar size with this ‘pomegranate’ pattern are known, including a dish sold as part of the Greenwald collection by Christie’s Hong Kong in December 2010. It realised HK$2.66m ($343,939).

This helped explain the enthusiasm for this piece that, despite its condition issues, sold at £31,000 (plus buyer’s premium of 18% including VAT).

News In Brief – including the Fitzwilliam buying Queen Victoria sculpture