In the first of a two-part report spotlighting UK auction house performance and trends in 2017, ATG reviews the hammer totals and top lots at some of the regions’ leading salerooms. Solid rather than spectacular was how some of the elite of Britain and Ireland’s regional fine art auctioneers described 2017.

As Guy Schooling, chairman at Sworders, puts it: “Overall trading conditions are still a little challenging. There remains an exceptional amount of money available for the best items but not much to spare for the rest.”

The year that saw battle commence for London’s ‘middle market’ in the wake of Christie’s South Kensington’s closure also brought a change to the top of the established hierarchy for the first time in a decade.

Fellows has shown considerable growth since the turn of the decade, consistently turning over more than £10m as it morphed from a general fine art auctioneer into a specialist operation catering to the growth markets of jewellery and watches.

Woolley & Wallis was placed second in ATG’s regional review, with a hammer turnover for the year of £15.7m.

The picture department’s strong showing was helped by the Keith Allison collection of Modern British art, including Keith Vaughan’s Sunbathers which sold at £120,000.

At the end of 2017, Woolley & Wallis upped its buyer’s premium to 25% – a reflection, it said, of the change in credit card legislation and the squeeze in margins on premium lots. This month many specialist departments will be moving from Salisbury town centre to a large building in Old Sarum that the firm purchased last year and has refitted.

Sales will continue to be held from Castle Street but Viney estimates this will double the working space available to each department.

“It has been a good year. The ongoing challenge nevertheless is to pull in the private collections and individual high value lots that make the difference,” said Jeremy Pattison, managing director at Tennants. The highlight of 2017 was an Italian oil on panel Madonna and Child in the manner of Filippo Lippi sold at £135,000.

Edinburgh-based Lyon & Turnbull is among the regional firms with a south of England foothold.

Cheffins in Cambridge enjoyed fine art sales of £9.4m. Twentieth century works of art, from jewellery to modern first editions and pictures, provided the saleroom with many of the year’s highlights. A double-sided Giacometti sketch from the collection of Eila Grahame topped proceedings at £130,000.

However, Cheffins also held one of the best-attended antiques events of the year – the cache of pictures and furniture from the derelict Little Barford Manor in Bedfordshire sold in September.

One-off events such as this bucked the long-standing trend of a softness in the market for traditional European furnishings.

Asian art sales at Stansted Mountfitchet totalled over £1m for the first time in several years, and fortnightly ‘interiors’ sales prospered, while the calendar was expanded with the addition of two Modern and Contemporary print sales. 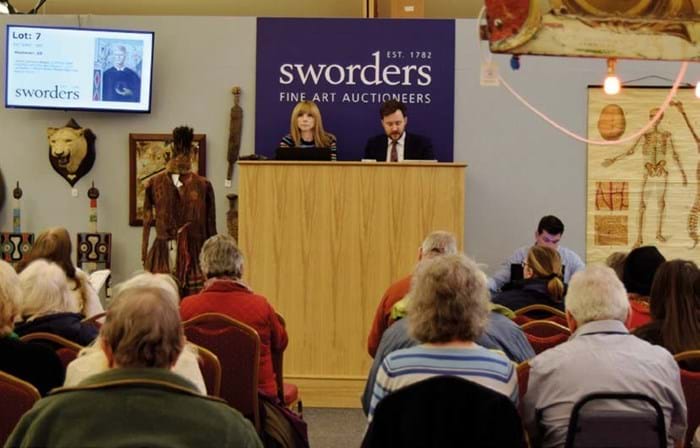 Adam’s in Dublin enjoyed a 30% year-on-year increase in total sales to €11.25m. Managing director James O’Halloran said the firm had enjoyed success in all departments including silver (with the sale of the Weldon collection), jewellery and watches and an antique furniture market he believes is showing signs of recovery in Ireland.

Irish art sales were strong. “The ‘blue chip’ artists are holding firm while the ‘Moderns’ are resurgent. Buyers still tend to be primarily here in Ireland but there is an increase in US bidders.” “Antique furniture is making slow but steady progress in terms of price and popularity, particularly among a younger cohort of home-makers who are beginning to see the great value in antiques and also the opportunity to decorate in an individual style. Our regular ‘At Home’ auctions too, held on Sundays, are hugely popular.” “2017 saw the opening of our new London gallery premises in Connaught Street and we have introduced select jewellery sales now taking place in London twice a year, in addition to our Asian sales in the capital. We look forward to introducing other specialist sales in London in 2018.” “We now have eight or nine sales each year dedicated to 20th century goods, quite a change from even five years ago. Overall trading conditions are still a little challenging. There remains an exceptional amount of money available for the best items but not much to spare for the rest.” “While, of course, everyone enjoys the glory of the mega lots, I find it rather comforting that we didn’t have any real high-fliers last year but still managed a £15m+ turnover. It indicates the overall solidity of our business.” “In 2018 we are focussing on our digital offering, with investment being made in a new website and back office system. We are also investing in more junior members of the team, bringing on future valuers which will allow our senior team more time to carry out valuations across the country, which we are seeing an increased demand for.” “The market for 20th century and contemporary art and design continues to perform well. But like other sectors of the market, buyers are becoming increasingly discerning and selective, focusing their buying power on targeted lots rather than spread betting across the sales.”