Forum is venue for wide variety

Roman and 20th century poetry, science and sarcasm, Arctic printing, Mayan discoveries, cranes and a porcupine, as well as a miniature master of calligraphy all featured in one of the first large London book sales of the year. 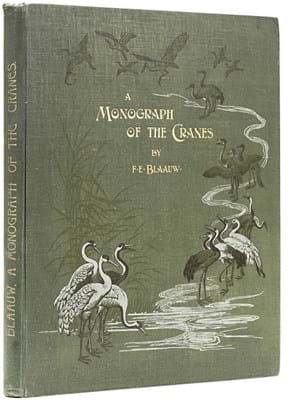 The ages of poetry

A group of Seanus Heaney lots offered by Forum included a first-issue copy of his first separately printed volume of verses.

In original printed wrappers, this ‘Festival Publications: Queen’s University of Belfast’ copy of 1965 was inscribed for Dr Peter Rogers, a mentor and president of St Joseph’s Training College in Belfast while Heaney was a lecturer there. It made £4000.

Also inscribed for Rogers was a copy of Heaney’s first commercially published volume of verse, Death of a Naturalist of 1966, which made £2200.

Running to 50 or so lots was a comprehensive single-owner collection of the works of Catullus. Highlights included, at £4000, a 1503, Giunta of Florence edition in later vellum of a volume containing poems by Catullus, Propertius and Tibullus.

The first of Giunta’s octavo editions, and essentially a copy of an Aldine edition pirated in the previous year in Lyons, this was the work that prompted Aldus to begin the 10-year fight to protect his publications – one that finally succeeded with the grant of a papal privilege in 1513.

Bibliographical scholar John Carter, himself an avid collector of Catullus’ works, mentioned the book in his Taste and Technique in Book Collecting of 1969, and indeed used it to define the concept of rarity.

A 1975 first of North that was both signed and bore an inscription quoting from Shakespeare – “Our poesy is a gum which oozes from whence ‘tis nourished” (Timon of Athens) – made £1700. A spread from a 1503, Giunta of Florence edition of a volume containing poems by Catullus and others. Part of a large collection of works by the Roman poet, it made £4000 at Forum Auctions.

One of a group of 17 ink and watercolour drawings made by CE Brock for a 1908 Dent edition of Jane Austen’s Sense and Sensibility sold at £6000.

The half-calf bindings of this six-volume set of Richard Bentley’s 1833, first collected edition of Jane’s works were defective but association appeal pushed bidding to £8000.

As noted in the first volume, the books were given in 1856 to her daughter Louisa by Fanny Catherine Knight, the eldest child of Jane’s brother Edward, someone Jane adored and considered “almost another sister”.

Sold for £2000 was a volume containing all 112 parts of what became known as ‘The Penny Pickwick’.

Published c.1836-39, this was a plagiarised version of one of Dickens’ earlier works, a woodcut illustrated version by Thomas Peckett Prest of the book, here called The Posthumorous Notes of the Pickwickian Club, edited by ‘Bos’. For those unable to meet the one shilling cost of the genuine parts issue, this one was available at just one penny.

Many great scientific papers appeared first in the pages of the journal Philosophical Transactions, and one from an issue of February 19, 1671 – part of a volume containing a dozen issues of Vol VI – was responsible for a bid of £9000.

That issue included A Letter of Mr Isaac Newton… containing his new Theory about Light and Colours, Newton’s first scientific publication and the foundation for most of his later work on optics.

Bid to £1100 was Edward Jenner’s copy of the 1822, fourth edition of Bonington Moubray’s Practical Treatise on Breeding, Rearing, and Fattening, all kinds of Domestic Poultry, Pheasants, Pigeons, and Rabbits.

Inscribed “Edw. Jenner from Dr. Worthington”, it also bears several pencil annotations in his hand to the early pages. Jenner (1749-1823), the pioneer of vaccination, and the Rev Worthington were lifelong friends and it is known that Jenner showed him a draft of his original paper on vaccination before publication.

Jenner’s annotations in this book are mostly scathing comments on Moubray’s text. In one instance, where he writes that Buffon was mistaken, Jenner adds “as, in common with French writers, he is on numerous occasions”, and when Moubray states “Buffon introduces several foreign varieties, of which I have no practical knowledge” Jenner comments, “nor he, either”.

Estimated at £500-700 but sold for £9500 was an 1822, first English edition of Antonio del Rio’s Description of the Ruins of the Ancient City discovered near Palenque, in the kingdom of Guatemala.

Illustrated with 17 litho plates after JFM de Waldeck and uncut in original boards, this was the first published study of the Mayan city.

The very last lot to be offered in the Forum sale was an example of the calligraphic skills of Matthew Buchinger (1674-1740) that sold for £6500.

Born without hands or feet, Buchinger nevertheless became an accomplished artist, musician and magician known as ‘The Little Man from Nuremburg’.

He was also accomplished in calligraphy and illustrations made using miniscule texts. Dated “London, January the 12th, 1723/4”, this example of his calligraphic skills incorporates ornamental flourishes as well as inverted and reversed text.