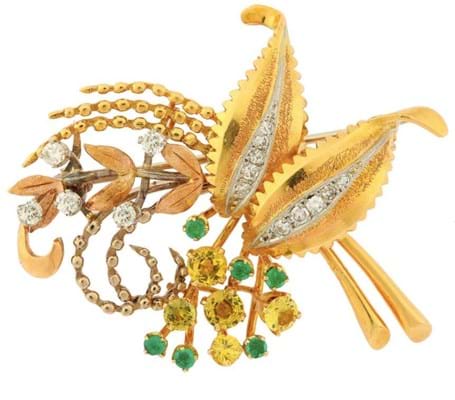 At a by-election in May 1931, the Conservative politician Robert Perkins (1903-88) was elected as MP for Stroud in Gloucestershire.

During the general election six months later, he was elected a second time, holding on to his parliamentary seat with an increased majority.

Possibly made as a gift for Perkins himself, the bronze figure (pictured above) of a paperboy runs with the results of both elections inscribed on the paper held in his outstretched hand.

Perkins was knighted in 1954 and retired from the House of Commons the following year.

The silver C270 was made in 1968 and replaced the slightly smaller gold C261, which was made in 1965 to promote the Bond film, Thunderball. The C270 incorporated the Q Branch gadgets of the previous model, as well as new features such as revolving number plates and rear tyre slashers.

Chiswick Auctions’ jewellery sale in London on November 21 features a hallmarked brooch made by Birmingham jeweller Alabaster & Wilson in 1967.

The 2in (5cm) long gem-set spray brooch is made from 18ct white, yellow and rose gold, brilliant-cut diamonds, circular-cut emeralds and yellow sapphires.

A prolific watercolourist, the artist focused on painting pheasants, grouse and other game birds, either in flight or on the ground.

For the armchair globetrotter