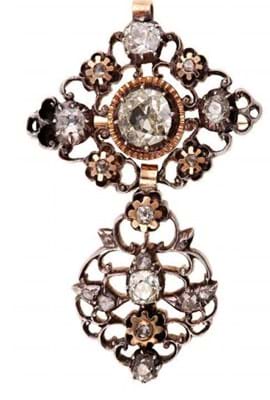 The work, which depicts a man sitting in a chair, stands on a large wooden plinth and is signed by Marinsky and the Fonderia Luigi Tommasi, which operated from 1957-85.

Among the highlights of Cheffins’ Art & Design from 1860 sale in Cambridge on May 11 is this French summer scene by British artist Eliot Hodgkin (1905-87).

Consigned from a private collection in Northamptonshire, Villa in the South of France with poplars measures 21 x 12in (54 x 32cm) and is signed to the oil on board E Hodgkin ‘66.

This 19th century diamond pendant and brooch features in a dedicated jewellery sale at Chiswick Auctions on May 9 in London.

Of scrolling pierced form, the 2in (5.5cm) navette-shaped surmount is set with a cushion-shaped 1.7ct diamond to the centre and several smaller similarly-shaped and rose-cut diamonds.

This 2ft x 18in (61 x 46cm) abstract lithograph by John Piper (1903-92) goes under the hammer on May 6 at Roseberys’ Modern & Contemporary Prints and Multiples auction in London.

Published by Contemporary Lithographs and printed at the Curwen Press, Abstract Composition (1936) carries the dedication: For Chris & Rose, With love April 1978.

Chris Prater and his wife Rose were founders of the influential Kelpra Press and collaborated with Piper many times.