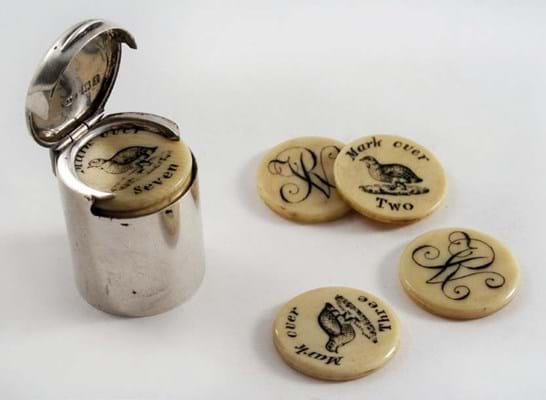 A tea cosy and purse presented to Lord Kitchener in India will feature in Woolley & Wallis’ March 28 auction in Salisbury.

The elaborate gifts incorporating zardozi work, a form of Indian embroidery, date from the period when Kitchener served as Commander in Chief of the armed forces in India between 1902-09.

The pair are believed to have been a diplomatic gift from Shah Jahan, the female Begum ruler of the Princely State of Bhopal in central India. The state is a notable centre in the production of zardozi work.

The scarlet velvet tea cosy is adorned in gilt thread and sequins on one side with Shah Jahan’s title and arms, and on the other with the names and titles of Kitchener.

The pair have passed down by descent from Kitchener and are estimated at £500-700.

A pair of bronze sculptures modelled as boys, one playing pipes, the other holding two birds, are guided at £1500-2000 in John Nicholson’s sale on March 23 in Haslemere.

Measuring 2ft 3in (69cm) high, they are signed on circular marble bases by the 19th century French sculptor Auguste Moreau.

A unique bronze humidor by Dunhill is among 1000 lots going under the hammer at Andrew Smith & Son on March 28-29 in Itchen Stoke, Hampshire.

Made in London c.1910, the box was commissioned by the aviator and inventor John Clifford Savage (1881-1945). The decorated relief case is surmounted by Diana the Huntress and features panels of hunters and animal handles.

Consigned from France by the late owner’s granddaughter, it is guided at £1000-1500.

An Edwardian butt marker stars in Lawrences of Crewkerne’s sale in Somerset on April 4, estimated at £900-1200.

Such markers are used to help choose the first shooting position to start from in a game shoot. They are often shaped like Vesta cases or cartridges, and contain up to 10 pegs made from either bone or ivory.

This 1in (3.4cm) high silver example by Joseph Walton, London 1904, is in the form of a plain cylindrical box.

With a sprung-loaded interior, it contains nine numbered and engraved ivory discs, each one monogrammed VR or RV on the reverse.