A large collection of Russian porcelain, paintings and works of art from the collection of the late dealer Jan Bethge is to be sold on January 25 at Lyon & Turnbull in Edinburgh. 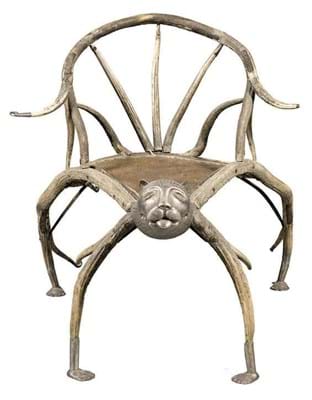 The items are the last to be sold from The Winter Palace, Bethge’s antiques shop in Kensington Church Street in west London, which closed its doors in the early ‘90s.

Harvey was one of a few artists associated with both the Newlyn colonies and the closely linked Lamorna artists. He exhibited first at the Royal Academy in 1898 and then regularly between 1907-41. He established the Harvey-Procter school in Newlyn with his friend, the artist Ernest Procter.

A star of Sotheby’s Royal and Noble Descent sale on January 19 in London is this 19th century Indian stag antler chair with a silver-mounted tiger mask.

The diminutive 2ft 3½in (70cm) high piece is included in the 128-lot collection of items from Colstoun in East Lothian, the home of the Brouns of Colstoun for nearly a millennium.

The chair is thought to originate from Kashmir or the Punjab, although Sotheby’s suggests it may also be linked with Tipu Sultan through James Broun- Ramsay, the 9th Earl Dalhousie. He spent time in India as commander-in-chief in the early 19th century and served under the Duke of Wellington who famously defeated Tipu in the Fourth Anglo-Mysore War (1799). Estimate £5000-7000.