While English ceramics feature in most provincial sales, November provided four auctions where the market could be looked at overall. 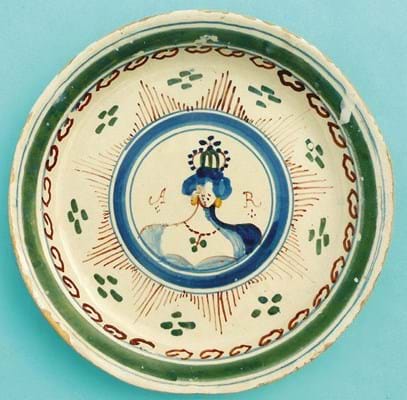 The viewing for sales at Historical & Collectable (20% buyer’s premium), set up near Reading in 2003 by veteran specialist Andrew Hilton, is always a draw for Prattware and commemoratives enthusiasts. However, the November 18 sale included something from the mainstream.

Comprising two tureens and covers, two 11in (28cm) wide oval dishes and 24 8in (21cm) diameter plates (there were probably originally 36), it would have been designed to be displayed in the finest 19th century dining rooms.

The 21st century problem was summed up in a question put by Hilton: “How many people have dining rooms these days?”

Nevertheless, the service, with only a chip to one plate and minor restoration to the tureen lids finials, had an importance beyond its function to collectors.

Twelve years ago, the service took $25,000 (then about £14,000) at Sotheby’s dispersal of the Lawrence Rockefeller estate in New York.

The market has softened since the financial collapse but Hilton’s judgment of the current situation proved spot-on when the service went to a private bidder at the top estimate £12,000.

The decorative tradition at Worcester established by Messrs Barr and Flight continued into the 20th century. Its sustained popularity was in evidence at Mallams’ (20% buyer’s premium) in Cheltenham on

November 30 when a dessert service was one of two well-received lots decorated by Richard Sebright.

Sebright, who worked at the factory from 1882-1946, suffered financially because he took time to produce pieces as near to perfection as he could – not the way to get rich when one is paid by the job. What he lost in money he gained in lasting regard as Worcester’s best-ever painter of fruit.

At Cheltenham, his signed 9 x 6in (23 x 15cm) oval plaque of fruit took a five-times estimate £1000, and a 27-piece cobalt desert service individually painted with fruit (two by fellow decorator William Bee who left the factory in 1932) sold at £5000.

Back at Historical & Collectable, a number of lots were offered in line with the sale title Caricatures, Commemoratives, Fairings & Potlids.

Among them were two delft (probably London) commemorative polychrome plates with ultra-naive portraits of crowned monarchs.

Although there are now only a few active high-end collectors of delft, Hilton believes the market is standing up well for rarities in good condition.

One plate, 9in (23cm) diameter, c.1702, depicting Queen Anne and initialled AR, had some glaze loss and a small manufacturing fault. It took a top-estimate £4000.

The other, c.1690, showing William and Mary and initialled WMR, was slightly smaller at 8¼in (21cm) and with a tiny chip. It went comfortably above hopes, selling at £3600.

Prattware has had a considerable boost from new collectors in Australia and New Zealand, says Hilton, who received a stream of antipodean bids for paste pots and lids from a deceased estate. These were there to sell, and he abided by the mantra gained in 40 years of auctioneering.

“Low estimates bring high prices, high estimates bring no sales,” he said, noting that his biannual sales generally have a 90%-plus selling rate. In the latest 500-lot offering, only 12 failed to get away. A New Zealander did secure a pot and lid commemorating General Sir Harry Jones (1791-1866), a young hero in the Peninsular War and an active commander of the engineers in the Crimea. Depicting the general cheering on the troops at Sebastopol, the pot took an eight-times estimate £1200.

Twentieth century Royal Worcester and 18th century London delft were among the attractions at Halls (19.5% buyer’s premium) in Shrewsbury on November 22-23.

Pairs of 11½in (29cm) tall Royal Worcester ewers, painted with sheep by Harry Davis and highland cattle by John Stinton, sold within estimate at £7100 and £7000 respectively.

Two c.1750 delft plates, attributed to Vauxhall, each estimated at £400- 600, sold at £2900 and £2500. The polychrome decoration of working pot kilns bordered by chinoiserie motifs was their primary attraction.

The sale also included the second, smaller tranche of Caughley porcelain amassed by the president of the Caughley Society, the Rev Maurice Wright of Shrewsbury.

Given its location, about 15 miles from the short-lived Caughley factory (c.1775-99), Halls has long enjoyed a degree of specialist status selling these wares. The firm garnered £72,000 for the first half of the Rev Wright’s collection in April and £17,000 for the 80 lots sold in November. The sale attracted bidders from all over the country – some spending more on overnight accommodation than at the auction, where two-figure and low three-figure bids were the order of the day.

A talking point was an 11in (28cm) tall rare blue and white jug proclaiming Honour and Honesty. John Hill for Ever…Majority of 44 in the year 1796. It referred to the Shrewsbury parliamentary election fought with the usual bribes of money, ale and food by John and his brother William. In fact, Honest John had counted in the spoilt votes and the warring brothers both lost to a third candidate.

The jug was catalogued as by Caughley or John Rose Coalport, who trained at Caughley before setting up on his own at Coalbrookdale in 1795. The jug is sometimes referred to as the first piece of Coalport, although several moulds exist and it is possible that both factories produced the jugs. This example sold on estimate at £1000.

John Rose was also involved with the Calcut factory at Jackfield (1794- 96) and brought it under Coalport control in 1796. A Calcut blue and white cabbage leaf jug was described by Halls ceramics expert Caroline Dennard as “the rarest Shropshire pottery you can get because the factory only ran for three years”. The 8in (20cm) tall jug transfer-printed with the Elephant pattern sold on the lower estimate at £1000.

The November 11 sale at Potteries Auctions (20% buyer’s premium) in Silverdale included plenty of the 20th century material for which the Staffordshire saleroom is best known.

A pair of 7½in (19.5cm) vases, each decorated with a vignette of Cupid getting an archery lesson from Venus in one and a winged angel in the other, took a mid-estimate £3600.

A single 9½in (24cm) vase and cover decorated with a woman with baskets of fruit surrounded by winged cupids doubled the mid-estimate at £2800.

There were 105 pieces of Moorcroft, most of them relatively recent productions. However, a 13in (33cm) William Moorcroft Burslem vase decorated in the Big Poppy design lived up to a more ambitious £2000-5000 estimate, selling to a collector at £3300, while a Macintyre bowl made for Liberty in the Claremont Toadstool design took a mid-estimate £1400.

Beswick collectors, as ever, knew their market in rarities.

Top-seller among the 130 Beswick pieces was a shire horse (818) in a rare skewbald colourway which went above estimate at £3350. The same model with a piebald coat took a within-estimate £1900 and one in the chestnut a mid-estimate £1100.

In the depressed world of Royal Doulton figures, only rarities perform well. The exception to two-figure bids at this sale was a 1950s prototype figure of a cleaner with a mop and bucket, designed by Mary Nichol. Impressed model no 1865 to base, the 8¼in (21cm) tall figure estimated at £400-800 sold at £1500 (see picture on facing page).

Wedgwood chess sets appeal beyond pottery collectors. The jasperware example here, based on figures from Macbeth, was first designed by John Flaxman in 1783 but has been reproduced from the original moulds at various points across the centuries.

The blue and white version at Potteries Auctions was not dated in the catalogue.