Working as a dealer can mean long, solitary hours but it can also be a collaborative pursuit. Here, ATG highlights the work of three from around that trade whose work brings them into regular contact with the wonderful world of art and antiques dealers. Our spotlight falls on a marketer, artist and photographer who are the ‘added extras’. Online presence is ever-more important and getting the right digital mix can be a challenge. Marketing consultant Gini Coates of Gini Coates Studio works with antiques dealers around the UK trade to define and update their presentation on and offline.

According to Coates, the key to standing out among a wide field of dealers is building a strong brand and having a solid digital strategy.

“Branding isn’t just a logo but the entire attitude of a business,” she says. “It should be reflected through all media, digital and print including the language used to communicate.”

Sometimes, though, it’s easier to see strengths and weaknesses from the outside, which is where she comes in. Winner of the New Designer of the Year in 2004 and ’05, she went on to study at the Royal College of Art. Now a LAPADA-approved specialist, she counts Butchoff Antiques, Wick Antiques, Hatchwell Antiques and most recently Howard Walwyn among her clients.

One rule of thumb is thinking of a website as a “digital shopfront” with the potential to be more powerful than a stand at any fair. The key is creating impact using “great graphics” and “finely stylised photography” and appealing to the market as a whole, not just personal taste.

“You are selling luxury items so the website must be aspirational and make the business look sexy.”

When it comes to images, she advises that photographs of stock (“Grey, graduated stock photography is not in fashion. Clean and modern is the way forward without making the items soulless”) be balanced with lifestyle shots. Having a good-looking website is not the end of the story, either. It should be synchronised with social media channels and e-shots which are more than just a list of stock, to help drive traffic to the site.

Coates sees certain key mistakes on dealer websites. As well as bad photography and those sites not optimised for tablet and mobile – Google automatically pushes these further down its rankings – are sites that are difficult to navigate.

“First-time site visitors will often not enter your site via the homepage and if menus and buttons are not easy to use they will leave,” Coates says.

“Clients often do not know what they are looking for until they find it, so breaking down your site into a simple inventory is not enough any more – you need to cross-advertise. Think about how supermarkets entice shoppers into buying things they did not set out to buy. It is the same principle.”

Her business works with a range of clients in the luxury and fine art sector.

When the going gets tough, it is helpful to remember that dealers are not alone. In fact, Coates suggests that the industry is in a strong position: “Antiques have never been more fashionable, they just need a rebrand. You see all other industries working hard to reinvent themselves. Antiques are no different.” Her line is called the Art of Salmagundi, taken from an old French and Middle-English word which means relating to a hodgepodge of things or a mixture of ingredients. For each piece she takes broken flatback figures and reassembles them in new – and often unusual – ways.

“I think you could call it an anarchic tic,” says Douglas, who at the start hid her creations in cupboards in her studio. “I was not really sure what I was doing. My imagination and humour, I know, can come across as quite weird and I was not sure where to exhibit.”

However, in 2008 she was included in her first group show at Hove Museum called Precious: Reclaiming Art and Craft and had her first solo show, The Unfortunate Souvenirs of Our Time, at Jack Hanley Gallery in New York earlier this year where she made several sales to private collections. Now represented at both Jack Hanley and Brixi in Brixton, Douglas feels that she has found good homes.

And with her work due for display by Cynthia Corbett Gallery in the Young Masters exhibition (October 2-14 in The Royal Opera Arcade Gallery) and Collect, the Crafts Council’s show (February 21-25, 2018 at the Saatchi Gallery) she has a lot to look forward to alongside her day job as a restorer.

Trained in restoring by her father Donald Douglas, Amy went on to work with ceramics, glass and enamels conservationist Sarah Peek in Brighton. It was around five years ago that she started rearranging broken figures instead of doing what she was “supposed to do”.

Crucial to her work is using figures as they come to her. “I do not vandalise any pieces in order to meet my directive,” she says. “That simply is not the point.”

Luckily, there is a good supply of broken Staffordshire out there. These figures are often placed on mantlepieces and get damaged during dusting. Each break is unique, which means that no two of her “interventions” are ever the same. But it also means creating new works can be time consuming as each fragment has to have an appropriate break.

“In fact, some of the objects are completely smashed so I have to do a full restoration job before I can start,” she adds.

Meanwhile, she’s hard at work moving her ideas forward, such as hopes of having a few of her pieces made in the potteries of Stoke.

“I would love to create a new series of works that pay homage to this whole history of mass-produced figurines,” she says. “I want to start a new market for Staffordshire Flatbacks – a revival if you wish. I am looking for funding or sponsorship to do this.” 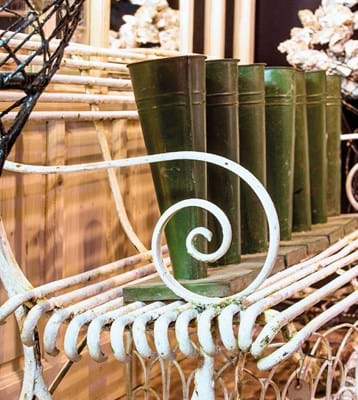 Photographer Nick Matthews finds that having a personal interest in antiques has been helpful in his job.

“Having bought, repaired, exchanged and even sold antiques for more than 25 years I have a strong appreciation for what I am now asked to photograph,” Matthews says.

He got his first paid photography job age 14. Though he worked as a policeman for 20 years and in the construction industry for more than 10, he recently retrained in digital photography and completed a BA Hons in commercial photography. He is currently completing his MA.

Now Matthews counts Sue Ede of Cooper Events among his clients, as well as various antiques and decorative trades and magazines. He drives around the country with a full-size studio and 11 kit bags filling his “decent-sized” estate car. And his work with the trade is getting busier all the time.

“Over the last 10 years, my work in the antiques community has increased as more clients require high-quality images to promote internet sales,” he says. Like Coates (see story 1), he urges dealers to use a selection of high-quality, professionally produced images in any advertising but particularly online.

“More and more client feedback informs me that sales increase as a result of good images on their websites,” he says. “Even items that have previously been advertised online have sold once they’ve been professionally photographed.”

At fairs, he will photograph whole stands and individual items before the public arrives, often focusing on smaller, individual items once it has started. In the evening he will process the images from the day’s work. The trick, he says, is lighting each object to its best advantage – not always easy when confined to a small area at the back of an ongoing fair.

Anyone familiar with fair work will know that hours are long and he counts early morning and late evenings as a regular feature of the job. But the work is still full of surprises and no two days are ever quite the same.