Horsepower fails in face of the atmosphere

Otto von Guericke’s Experimenta nova (ut vocantur) magdeburgica de vacuo spatio… of 1672 describes the experiments in which he produced an air pump able to create a vacuum and thus demonstrate the pressure exerted by our atmosphere. 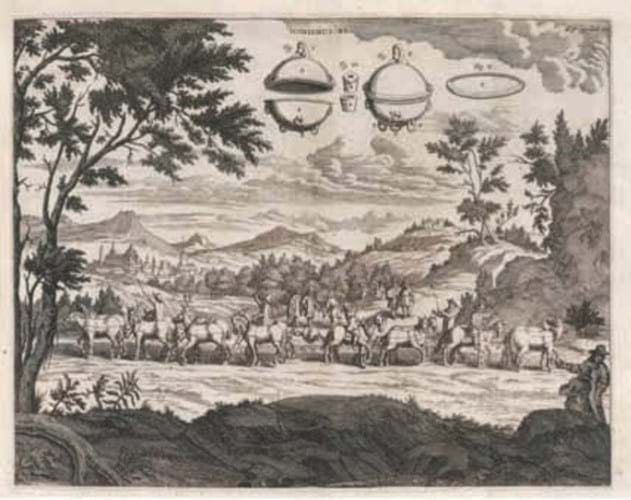 A plate from Otto von Guericke’s Experimenta nova… in which two teams of 15 horses attempt, unsuccessfully, to pull apart evacuated hemispheres, thus demonstrating the pressure of the atmosphere.

A first account had been published 15 years earlier by Caspar Schott, but this is von Guericke’s first full description of his Magdeburg experiments and inventions.

The work is illustrated with a portrait, two folding engraved plates and 20 further illustrations in the text, seven of them full-page – all of which were present in a copy in a period vellum binding offered on April 1 in Zurich by Koller (25/20/15% buyer’s premium).

The cataloguer of the copy in the great Macclesfield scientific library noted that in the year of publication Boyle and Hooke had paid 10 shillings for a copy on behalf of the Royal Society.

A right royal album from the nanny’s estate