The most read stories on this website over the last week included news of a rare flying VC awarded to the commander of the RAF’s 62 Squadron selling at Spink.

1) Pick of the week: Record price for an RAF Victoria Cross

The Battle of Britain or Dambusters are usually involved when it comes to sizeable Royal Air Force medal results. ATG’s weekly selection of items that caught bidders’ eyes included a Southern Song tea bowl with a presentation mark that attracted a flurry of bids at Hansons. 4) Titanic twists of fate: tale of two auction lots in the US and UK

Fate played a cruel hand in the case of two Titanic passengers whose stories have come to light through recent auction lots. 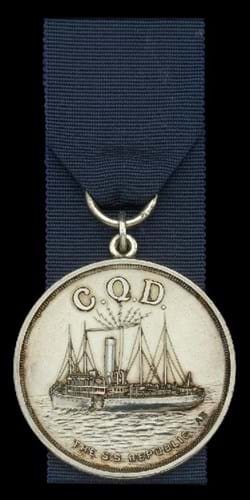 This CQD Life-Saving Medal awarded to a recipient for his bravery in a shipwreck in 1909, who later died in the Titanic disaster, sold for a hammer price of £1700 at Noonans.

A soapstone seal used by the emperor Qianlong to express his approval of paintings and calligraphy in the imperial collection sold at auction in Hong Kong for HK$131m (£13m). The Qianlong yulan zhi bao soapstone seal shown alongside a Chinese painting from the imperial collection that carries its impression. It sold for HK$131m (£13m) plus premium at Sotheby’s Hong Kong.

This list is based on unique users for individual news stories over the period May 5-11, 2022.