ATG’s weekly selection of items that caught bidders’ eyes includes a striking 18th century Indian miniature of a monkey that made over five-times estimate in South London. A good example of mid-19th century Company School art was eagerly contested at Roseberys’ sale of Antiquities, Indian & Islamic Art in London on April 1. This 10 x 9in (26 x 22cm) painting of a monkey c.1850 is based on a Mughal painting of the same subject.

The original, attributed to ‘the Stipple Master’ and dated to 1705-10, is held by the Art Institute of Chicago. According to an inscription on the reverse, the monkey was named Husaini and owned by Daud Khan Panni, a faujdar (military commander and territorial administrator) who served the Mughal emperors from Aurangzeb (1658-1707) to Farrukhsiyar (1713-19).

In this later version some details, such as the grass and rope from the monkey's neck, are removed in favour of a simplicity characteristic of the period. Such a striking and well painted image guided at £2000-3000 was always likely to sell over estimate. It sold at £17,000. 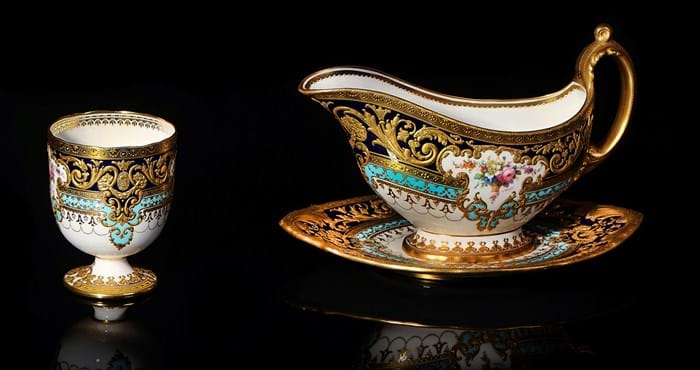 The celebrated porcelain dinner and dessert service, with flowers by Albert Gregory and rich gilding by George William Darlington, was one of the most expensive services ever made at Derby. Numbering more than 400 pieces, it was commissioned in 1903 by Tiffany & Co, New York for Judge Elbert H Gary (1846-1927), an Illinois lawyer, county judge, financier and corporate officer best remembered as a founder of US Steel, along with JP Morgan, Andrew Carnegie and Charles Schwab. The steel mill city, Gary, Indiana takes his name.

Gary’s tastes were famously ostentatious and he chose a design that evoked the great French porcelain services of ancien regime. It was meant to compliment a 566-piece solid gold service which Gary also commissioned from Tiffany.

Derby took several years to fulfil the order with most pieces dated 1907-10. The service remained in the family until it was sold at Sotheby's, New York in October 1998 in eight lots. Since then, numerous pieces have appeared for sale piecemeal. A pair of Japanese export lacquer and moth of pearl cutlery boxes – £12,000 at Dreweatts.

In 1799 the Dutch East India Company's chartered ship the Franklin of Salem arrived in Nagasaki on a trading mission. The personal account books of the captain still survive and record that he brought back a considerable quantity of Japanese lacquer, all of it apparently made in contemporary European shapes. The shopping list included '22 lacked knife boxes'.

The furniture sale at Dreweatts in Newbury, Berkshire on March 30 included a pair of slant-fronted boxes in black lacquer set with mother-of-pearl motifs of foliage and exotic birds. The hinges, clasps and handles are in pierced and engraved white metal.

Dated to c.1800 they were in largely original condition, retaining the matrix and green velvet lining to the interiors, with a few signs of old remedial work and touching up to the surface. The auctioneers pointed to a single example sold at Christie’s in December 2007 for £1750 as part of the collection of Giorgio Marsan and Umberta Nasi but this pair took £12,000. Frances Wolfreston (1607-77) is a rare example of a named woman from the ordinary rungs of society who we know formed a substantial book collection. Focusing on English literature and drama, the majority of her library remained in family ownership until 1856, when most were sold at Sotheby's. The Bodleian holds her copy of Shakespeare's Venus and Adonis, 1593, making her one of the earliest known women readers of Shakespeare.

Books associated with Wolfreston occasionally come to market. And today her status as a named 17th century woman book collector adds greatly to their commercial appeal. This copy of Thomas Lupton’s A thousand notable things of sundrie sorts… printed in 1631 is inscribed in ink ‘'Frances Wolfreston, her bouk' and also with the name of her husband Francis (the pair were married in 1631).

Formerly part of the library of D Wyndham Smith, Inkberrow, Worcester (and blind-stamped to front free endpaper), it also has the armorial book plate for J Timothy Kenrick. Against an estimate of £2000-3000, it brought £11,000 at Forum Auctions in London on March 31. Toadstones are now understood to be the button-like palatal teeth of lepidotes, an extinct genus of ray finned fish from the Jurassic and Cretaceous periods. However, throughout the Middle Ages and into the 18th century they were thought to be found in the heads of live toads and were highly prized for their supposed magical powers.

In particular, it was believed they could be used as an antidote to poison and were commonly worn about the person as amuletic rings and pendants.

Loose toadstones were discovered among other gemstones in the Cheapside Hoard while William Shakespeare referred to them in As You Like It (1599) writing: ‘Sweet are the uses of adversity, Which, like the toad, ugly and venomous, Wears yet a precious jewel in his head.’

The subject of heated bidding at Reeman Dansie in Colchester on March 29 was a 16mm toadstone in a yellow metal mount inscribed verso Tode Stone. Certainly 17th century in style, it was estimated at £100-150 but sold at £4200. Carved from the heart of the toa or ironwood tree, long pole clubs with scalloped blades (akatara) are associated with Rarotonga and Atiu on the Cook Islands.

Ship surgeon William Anderson noted them during Cook’s Third Voyage while on Atiu in 1777, writing: “The clubs were about six feet long or more, made of a hard black wood launce shap’d at the end but much broader, with the edge nicely scallop’d and the whole neatly polish’d.”

This example measuring 7ft 4in (2.25m) came for sale at Wessex Auction Rooms in Chippenham on April 2. It showed signs of having been dry stored in an outbuilding for many years – bird droppings included – but it might well have been a 19th century survivor. If the guide of just £30-40 struck potential buyers as a late April fool, then the final bid of £38,000 was certainly no joke.

A box on the wing in Surrey