ATG’s weekly selection of items that caught bidders’ eyes includes a rare harpsichord with a painted lid that made a six-figure sum in Wiltshire. This early 17th century harpsichord, above, is inscribed to the name baton for Andreas Ruckers, Antwerp, 1614. The instrument, recorded by Grant O'Brien in his book Ruckers, A Harpsichord and Virginal Building Tradition, is most distinctive for the interior of the lid that is painted with an extensive landscape of St Theresa's hometown of Avila, Spain.

The painting was once attributed to Adam-François van der Meulen (1632-90) but is now thought to be earlier, perhaps c.1620 and by an anonymous hand. Since the instrument was last sold at Sotheby’s in 2004 (for £107,000 including premium) the paintwork has undergone professional restoration.

The instrument itself was adapted in the Georgian era to include a four-and-a-half octave keyboard. In his book on the Ruckers family, Dr O'Brien states: ‘This is a typical English 18th-century ravalement of a Ruckers harpsichord. The case was widened and the octave span narrowed to accommodate the extra notes.’ It is very unusual for a music box to play just one tune in several variations. The box plays four versions of Robin Adair, a once popular Irish song mentioned in Jane Austen's 1815 novel Emma.

The lyrics were written by Lady Caroline Keppel as a riposte to her family who disapproved of her lower-class husband, army surgeon-colonel Robert 'Robin' Adair.

The box, with a rosewood and floral marquetry case was in good working condition with no losses to the comb. 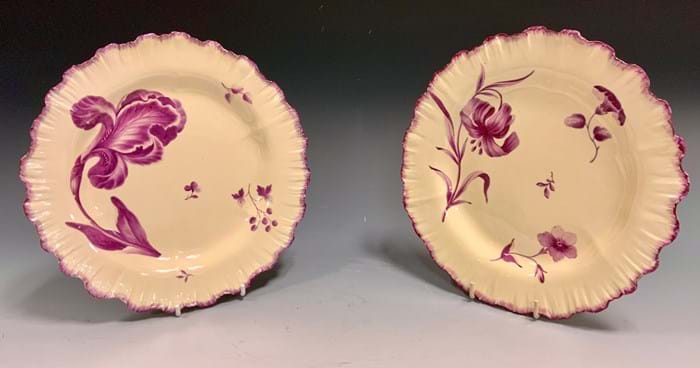 Estimated at £40-60, this pair of puce decorated creamware plates sold for a surprise £2000 at Bamfords in Derbyshire on June 19. Although dated in the catalogue to the early 19th century, these are probably much earlier – made by the Wedgwood factory c.1770-80 and decorated by artist James Bakewell.

He joined Wedgwood in the summer of 1768 and by the winter of 1769 Josiah Wedgwood reported to his partner Thomas Bentley: ‘Bakewell has set his mind on being a good enamel painter and really improves very much in flowers.’

Plates of this type with the distinctive shell edge moulding were included in the Husk Service supplied by Wedgwood to Catherine the Great and presently displayed at Peterhof Palace, St. Petersburg. This English delft drug jar with rare blue, green and iron red polychrome decoration is a documentary piece dated and initialled IP 1723. The jar was made to contain 'Theriaca Andromachi', a preparation made according to the formula of Andromachus, a Roman physician of the first century. Several other jars of the same shape and decoration are recorded and it is thought that at least two sets of this type were made, probably in London. It has been suggested that the initials IP may refer to James Piston who became Upper Warden of the Society of Apothecaries in 1722 and Master in 1723.

A nearly identical jar (with restorations to cracks and breaks) formed part of Syd Levethan’s Longridge collection and was sold by Christie's in May 2011 for £10,625.

This present example, again broken and reglued in multiple places, came for sale at Great Western Auctions in Glasgow on June 17-18 with a guide of £2000-4000. Portrait of Cathleen Mann by Harrington Mann – £11,000 at Lyon & Turnbull.

This portrait by Harrington Mann (1864-1937) of his daughter Cathleen aged around five or six brought £11,000 at Lyon & Turnbull’s sale of Scottish Paintings and Sculpture in Edinburgh on June 16.

The sitter provided the reluctant model for several of her father’s best London period works (the 1906 oil Cathleen hangs in the Museum of Fine Arts, Ghent) and here appears less than delighted to be sitting still once more. She is painted arms crossed, wide eyed and her hair tied in green ribbons.

Taught by her father and his friend Ethel Walker, Cathleen later trained at the Slade and became an established artist in her own right. Following her marriage in 1926 to Francis Archibald Kelhead Douglas, the 11th Marquess of Queensbury, she became unwillingly known as the 'Painting Peeress'.