The 7in (17cm) Victorian chased silver goblet, above, has marks for Exeter and RW, JW & JW for the Bristol family of silversmiths, Robert, Josiah and James Williams. Worked to the stem in relief with creeping vines, to the bowl is a rowing scene and a shield reading ‘Bath Regatta 1849 City Cup’.

Local history websites suggest the Bath Regatta of June 1849 was the first held at Saltford – a mile-long stretch of the river that allowed for a straight run, space for spectators and a nearby railway station. It was followed by a celebratory evening meal at the Castle and Ball Hotel described in the local newspaper The Bath Chronicle: ‘The tables were admirably furnished with a large variety of the best of viands, served in most elegant taste...

‘On the removal of the cloth, the prizes were placed on the table for the inspection of the company. Their elegance and beautiful workmanship called forth the warmest expressions of admiration.’

Some idea of that ‘beautiful workmanship’ was provided by this goblet that sold at a double-estimate £1550 at Whittons in Honiton, Devon on February 10. Although Thomas Tompion (1639-1713) is often referred to as the Father of English Clockmaking, his talents were not just limited to clocks. Much of his output was pocket watches (he made an estimated 5500 watches against 700 clocks).

As a general rule they represent the most affordable way to acquire a timekeeper by the most famous of all Golden Age clockmakers.

The Luxury Watch sale at Fellows in Birmingham on February 15 included this early 18th century open face pocket watch signed Thomas Tompion and Edward Banger, London. Towards the end of his career, Tompion partnered with Banger, who was married to Tompion’s niece, for six years from 1701-07. 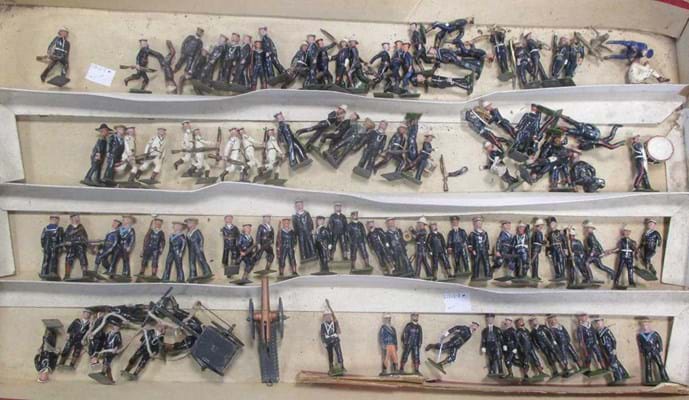 The Interiors sale at Cheffins in Cambridge on February 11 included one of the rarest of all Britain’s lead soldier sets. Set 1648 titled British Naval Display comprises 51 pieces including a Royal Navy Landing Party (with gun and limber), a Royal Marines band and additional figure in both blue and white livery. It is housed in Original Types of the Royal Navy Box.

Only a handful of these are known. When US firm Old Toy Soldier Auctions sold a pristine set (with figures still tied in to the card box) for $16,000 in 2015 it was thought to be the only example known.

The example at Cheffins was not in comparable condition but most elements and the box had survived intact. It was estimated at just £100-150 but was competed to £4600. A letter of rejection from Ernest Shackleton – £16,000 at Bonhams.

Ernest Shackleton was inundated with over 5000 applications for just 50 places on his Imperial Trans-Antarctic Expedition of 1914-17. Many were from men and officers from the Royal Navy. However, with Europe on the brink of the war, the Admiralty could not spare any men to take part in what was considered a non-essential expedition.

As shown in this typed and signed letter on Imperial Trans-Antarctic Expedition headed paper, Stoker Petty Officer William Blincoe was among those who were turned down. Shackleton informs him regretfully that his application has not been successful as the Admiralty will not allow any further Service ratings to join the expedition, apologising as ‘...I should have been glad to have some more men from the Service…’ Using woollen yarns on a linen ground, crewelwork is most typically associated with England in the 17th and 18th centuries. However this pair of crewelwork panels embroidered with a typical display of flora and fauna, were made in the 1940s by aristocratic sisters Mabel and Sybil Eden.

‘Aunty Mabel’ kept a diary throughout her life – describing eight decades of almost endless travel, luncheons, theatre and church fetes against a backdrop of seismic world events from the end of the Boer War to the onset of the Second World War. Her 76 volumes were edited and published in 2014 as Mabel Eden's Diary: The Life of a Lady, 1878-1949.

A sewing project such as this was an acceptable pastime for unmarried ladies of the leisured classes. Offered by Tennants in Leyburn as part of a sale of Costume Accessories and Textiles Sale on February 13, they were much admired and sold for £3200, more than 10 times the top estimate.