Old Master pictures from the Dutch ‘Golden Age’ will be offered as part of Christie’s Classic Week of sales in July. The works had once been owned by Jewish businessman Jacob Lierens (1877-1949) who was forced to flee and sell his family’s possessions when the Netherlands was occupied by Nazi Germany.

The paintings were restituted to Lierens’ heirs following the decision of the Restitution Committee in the Netherlands in 2019.

The committee concluded that “the sale of the paintings was connected to measures taken by the occupying forces against Jewish members of the population” and took place in order to save Lierens and his wife.

The forced sale of the Lierens’ collection took place at Frederik Muller & Cie in Amsterdam on October 14, 1941. The paintings were purchased by Hans Posse, the head of the Linz Special Commission that acquired art for the ‘Führermuseum’ planned to be built in Linz, Austria.

Recovered at the end of the war by the Allies’ Monuments, Fine Arts and Archives Section (known as the Monuments Men), both paintings were returned to the Netherlands, where they were transferred to the Dutch post-war organisations which handled receipt and restitution of such works.

The pictures became long-term loans from the Dutch government collection: The Hals to the Frans Hals Museum in Haarlem and the De Heem to the Centraal Museum in Utrecht. 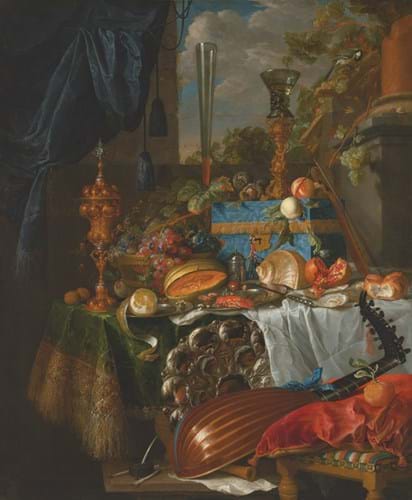 Henry Pettifer, head of Old Master pictures at Christie’s, said: “The extraordinarily detailed still-life by Jan Davidsz De Heem is one of his most celebrated works; while the interior by Dirck Hals and Dirck van Delen is one of the most grandiose genre scenes from the period. Having recently been restituted, this will be first time that either picture has appeared on the market in 80 years.”

Lierens and his wife were imprisoned for a time in 1943 in the Westerbork transit camp and they secured their release with payments in jewellery in August of that year. From there the couple and the family went into hiding, financed by the sale of some of their possessions. Lierens and his wife survived the war, as did their daughter Esther and her family and their daughter Rebecca and her family.

However, their daughter Branca Roselaar-Lierens and her husband Emanuel Roselaar died in Auschwitz.