The Meadows Museum in Dallas, Texas has announced that it was the buyer of a Spanish Baroque Old Master at a Christie’s auction last year. ‘Portrait of a Lady’ by Bartolomé González y Serrano which sold at Christie’s and has been acquired by the Meadows Museum.

The 3ft 11in x 3ft 3in (1.19 x 1m) canvas is signed and dated 1621 and was described in the auction catalogue as a ‘sumptuous portrait’ by the artist who produced more than 100 portraits of members of the Spanish royal family and their court. Although the elegant sitter here is unknown, she is thought to have been from the court of either Philip III or his son, Philip IV.

The picture is the first work by the artist to enter the Meadows’ collection and it is one of only a few portraits by González known outside Spain. It came to auction having descended through the family of Cuenca landowner and politician Julián Casildo Arribas y Arauz (d.1915). Only a handful of works by the artist have ever sold at auction and this example fetched over three times the amount of any previous result (source: Artprice by Artmarket). A detail of ‘Portrait of a Lady’ by Bartolomé González y Serrano.

The Meadows Museum is a division of the arts faculty at the Southern Methodist University (SMU) and its primary focus is the arts and culture of Spain. Holding one of the largest collections of Spanish art outside of Spain, it is sometimes referred to as ‘Prado on the Prairie’. The museum stated: “The portrait was made at a pivotal moment in Spanish history, which saw the movement of the imperial capital from Valladolid (Castile) to Madrid and, one year later, the arrival of Diego Velázquez (1599-1660) at court, who would go on to revolutionise the genre of portraiture by re-envisioning the model offered by González y Serrano and his predecessors.”

The purchase of the work was made in honour of Mark A Roglán to mark his 20th anniversary at the Meadows and the 15th anniversary of his directorship. It is now on view in the museum’s Jake and Nancy Hamon Galleries. 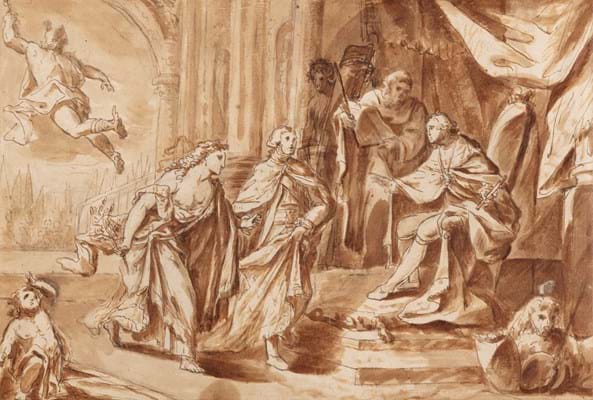 In a separate acquisition, the Meadows Museum also bought three drawings by Spanish artists from Madrid’s Galería Caylus. The sketches by Antonio González Velázquez (1723-94), José Aparicio e Inglada (1770-1838) and Casto Plasencia y Maestro (1846-90) are again not often found in collections outside of Europe.