Tang pottery figure of a Bactrian camel and rider – £40,000 at Pax Romana Auctions.

The form of this 2ft (61cm) high Tang dynasty (618-907) pottery figure of a Bactrian camel and rider, pictured above, points towards the Silk Road.

The Tang capital, Chang'an – one of the largest and most cosmopolitan cities in the world in the 9th century – became vastly wealthy thanks to its key position on the trade route. Caravans of Bactrian camels, imported from Turkestan and Mongolia, were essential for conducting trade with the oasis cities of Central Asia, such as Samarkand, and those in Syria and Persia.

The species was highly regarded by the Tang emperors who established dedicated offices to oversee the imperial camel herds.

This large and realistically modelled statue with a rider with non-Asiatic features was undoubtedly made to be buried with an elite member of society. Sold by Pax Romana in London on January 10, it came complete with a thermoluminescence certificate from a German laboratory and was described as ‘the property of a central London gallery, acquired from an established English collection; formerly acquired at the Hollywood Antique Center in in Hong Kong in the early 1990s.’

It made close to four times the estimate selling at £40,000. This 9 x 13in (23 x 34cm) Old Master pen and ink drawing of a figure fishing near dwellings and a bridge carried an attribution to Giovanni Francesco Barbieri, known as Guercino (1591-1666).

The mid-17th century drawing had been found in a Somerset bungalow and was badly foxed but generated plenty of pre-sale interest with both online and telephone bidders at Charterhouse in Sherborne on January 7.

It had a label and full attribution from the London dealer Thomas Agnew on the verso. A label also mentioned it had been in two well-known historic collections: that of William Easdaile (1758-1837), an English banker and print collector and the French painter and art collector Jean Francois Gigoux (1806-94).

Bidding became a two-way battle between two French buyers and it eventually sold for £16,000 (estimate £400-600) to a bidder in Paris using thesaleroom.com. This six-page letter penned from Perth on June 24, 1861 references the beginning of the Australian wine trade.

Sir Archibald Burt (1810-79), a colonial judge, writes to Andrew Bankhead of Swindell, Bankhead & Co reading his position of civil commissioner and chairman of quarter sessions in Western Australia. In addition to law reform he writes on the possibilities of grape cultivation. “I... have sent a long report to Mr Taylor of Madeira on the capabilities of this colony as a wine producing country to take the place of Madeira. Grapes grow here without culture and I am convinced that there cannot be a better wine country”. 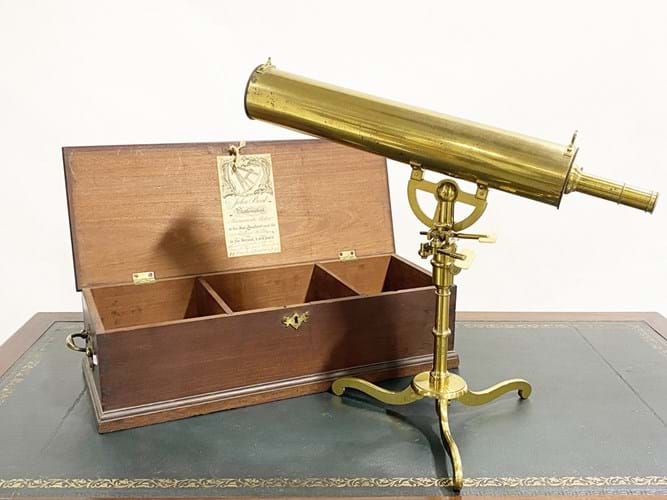 Gregorian brass telescope and stand by John Bird – £3800 at Gildings.

Gildings in Market Harborough sold this mid-18th century Gregorian brass telescope and stand for £3800 (estimate £400-600) in an online-only auction that closed on January 5.

The telescope was made by John Bird, a highly regarded instrument maker who was active in his workshops in London’s The Strand between 1745 until his death in 1776. He mainly produced large-scale instruments, notably including an eight-foot quadrant at The Royal Observatory, Greenwich, making this smaller ‘desktop’ example a rarity.

Bird’s trade label appears to the fitted mahogany box and the instrument itself is signed J Bird. However, it may be that the instrument was sourced from another maker rather than fashioned in Bird’s workshops.

It had been bought as a gift in the mid-20th century for the vendor’s brother-in-law, whose parents both worked at the National Physical Laboratory in Teddington in the early 1900s. This Naval General Service medal, 1793-1840, has two clasps, one for Copenhagen 1801 and the other for the battle of Trafalgar. Awarded to Thomas Bradford (a unique name in the rolls) he was a landsman aboard the Bellona at Copenhagen, and an able seaman aboard the Colossus at Trafalgar.

The Colossus was the sixth vessel in line at Trafalgar and played a prominent role in the battle. She suffered the most casualties in the fleet, with 40 men killed and 60 wounded.