The flagship art auctions due to take place at Sotheby’s and Christie’s in June and July remain on the calendar as live events. 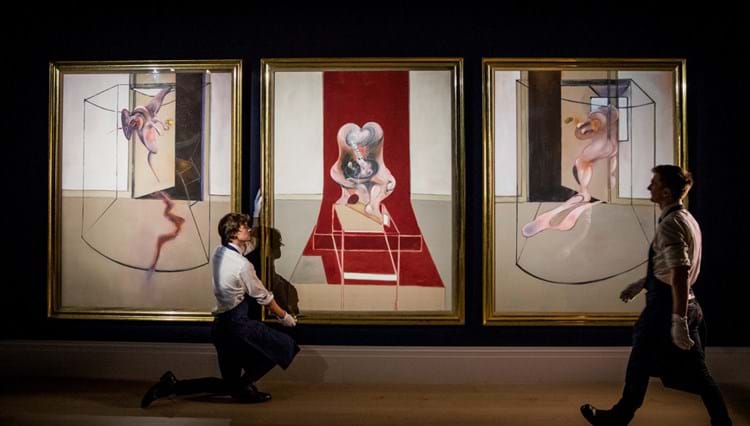 ‘Triptych Inspired by the Oresteia of Aeschylus’ by Francis Bacon, estimated in excess of $60m at Sotheby’s.

While the big two auction houses are staging online-only auctions throughout May, both are gearing up to reinstate live sales next month although details of exactly how they will work and what social distancing measures will be adopted are still being worked on.

Currently, Sotheby’s sales of Impressionist & Modern and Contemporary art in London are scheduled as live events in the week beginning June 23, while Christie’s have moved theirs to New York where they are being consolidated into a single week of 20th-century auctions.

The July Old Master auctions in London remain on the calendar at both houses.

Sotheby’s CEO Charles F. Stewart said earlier this week: “Our teams are beginning to return to work in a number of Sotheby’s offices in Europe and Asia, and we are actively preparing for the reopening of our galleries in New York and London.

“Looking ahead to June and July and our flagship sales – we plan to hold our evening and day sales of Impressionist, Modern and Contemporary art in New York in the week of June 29, pending the lifting of certain restrictions and confirmation from the relevant authorities. You will hear more about our specific plans and innovations to ensure success and safety, and we are excited about the very high quality of the sales.”

Among the most valuable lots announced for the upcoming New York sales is Roy Lichtenstein’s White Brushstroke I from 1965 which is estimated at $20m-30m and Francis Bacon’s Triptych Inspired by the Oresteia of Aeschylus from 1981, estimated in excess of $60m. Both are being offered at Sotheby’s Contemporary art evening sale at the end of June.

The Bacon is one of the artist’s 28 large-format triptychs that date from 1962 and 1991. This one was acquired by the Norwegian collector Hans Rasmus Astrup from dealer Marlborough Fine Art in 1984 and subsequently it has been in the care of the Astrup Fearnley Museet, a private museum in Oslo founded by Astrup.

‘Triptych Inspired by the Oresteia of Aeschylus’ by Francis Bacon, estimated in excess of $60m at Sotheby’s.

In 2013, Astrup donated all of his commercial assets to the foundation that runs the museum and proceeds from this sale will be used to provide long-term support and help expand and diversify its collection.

The work itself relates to a subject from Aeschylus’s trilogy of Greek tragedies, a classical text from the 5th century BC upon which Bacon also based earlier works.

Sotheby’s said its appearance at the New York sale represents only the sixth large-format Bacon triptych to have ever been offered at auction and the first to come to the market since 2014.