ATG’s selection of hammer highlights this week includes a rare French First Empire sword for a Légion d'honneur recipient that made over 35-times estimate. This extraordinary 3ft 2in (95cm) sword, with its gilt and blued undulating blade and finely tooled gilt brass and mother-of-pearl hilt, came with precious little history. However, some of the insignia can at least provide some clues to a once high-status owner. In addition to a medallion depicting a turreted lion's head (badge of the city of Lyon) is the monogram FG and the five-armed Maltese cross of the Légion d'honneur.

It was under Napoleon that weapons of honour were effectively replaced by the creation of the Légion d'honneur as a new chivalric order open to men of all ranks and professions. A secular order of merit, it was also an effective way of awarding political favours and ensuring loyalty. The sword was complete with leather scabbard with gilded brass mounts. Portfolio of ten stereoscopic daguerreotypes by Schneider and Sons, £21,000 at Chiswick Auctions.

Trudpert Schneider (1804-99), a Freiburg carpenter whose first brush with photography was to repair a broken box camera, is today deemed one of Germany’s most important daguerreotypists.

The photographic firm he founded in 1847 continued under the management of his sons Heinrich and Wilhelm until 1921.

The Schneider and Sons atelier perfected the life of itinerant photographers – typically travelling from one lucrative city location to another, occasionally stopping in the country to photograph estates and castles by invitation. The firm continued to produce daguerreotypes and stereo daguerreotypes well into the 1860s when the process had been replaced elsewhere by wet plate collodion photography.

At the height of their commercial success, during a trip to Russia in 1861, the Schneider brothers were treated as visiting dignitaries in Moscow and St Petersburg and given unparalleled access to the Hermitage, the Kremlin and members of the royal family.

A portfolio of 10 images of the interiors of Bavarian and Russian palaces c.1860, each stamped Stereoscop von T Schneider und Sohne, emerged for sale on April 29 at Chiswick Auctions.

Single stereoscopic daguerreotypes by the firm appear occasionally and can bring around £2000 each. However, the auction house believed it was the first time a group of this type has been offered on the open market complete with a contemporary maker’s box and stereo viewer. Among the top-estimated lots at Lyon & Turnbull’s ‘live online’ sale of African & Oceanic Art, Antiquities and Natural History in Edinburgh on May 5 was this Apulo-Corinthian helmet from southern Italy, c.350-500BC.

The hammered bronze helmet was previously part of the Axel Guttmann collection of ancient arms and armour sold by Sotheby’s in December 1985. Unlike the classic Greek Corinthian helmet, which was worn full-face when in combat, the Apulo-Corinthian variant was worn on the top of the head like a cap.

This is clear in this example, where the aperture for the eyes are far too small to be functional. Ventriloquist's doll in the manner of Arthur Quisto, £1500 at Swan Fine Art.

The sale held by Swan Fine Art in Tetsworth, Oxfordshire on May 6 included this fine quality ventriloquist's doll c.1930. Although not stamped, it shares the characteristic of figures made by the revered maker Arthur Quisto (1882-1960) – real name Edwin Simms – who built figures for a number of well-known musical hall performers. He was the first to use electromagnetic devices to animate his figures.

In addition to a carved wood torso, the face, hands and feet are moulded papier mâché and the hair probably human.

Appealing decorative objects and collectables, it sold at £1500 to a buyer using thesaleroom.com, way above the £60-80 estimate. 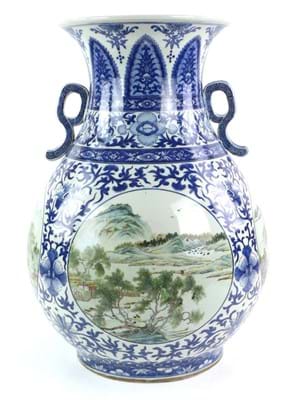 The top lot in the Asian Art auction held ‘live online’ by Ewbank’s in Send, near Woking on April 30 was this large 22in (55cm) high underglaze blue and famille rose decorated vase, decorated with circular landscape vignettes.

It carried a six-character mark for the emperor Qianlong (1735-96), and had it been 18th century it would have been priced comfortably into six-figures, but it was not of the period. It nonetheless sold as a 20th century decorative object for £20,000 against an estimate of £500-1000.

The winning bid came from China via thesaleroom.com.

Two Japanese swords that have the edge

Rare way to keep a wild boar at arms length