This early 17th century silver vervel or hawking ring – attached to the jesses around the bird's feet – includes in italic script Kyng James and the quartered arms of the Stuart kings.

Pictured above, it was found by a metal detectorist near Angmering, West Sussex in 2016. It was later declared under the Treasure Act but disclaimed as no museum was in a position to acquire it at its valuation of £4000-£4500.

A gap in many collections of 1960s James Bond cinema posters are those for On Her Majesty's Secret Service (1969) starring George Lazenby.

This life-size door panel poster, a format made popular in the Sean Connery movies, is particularly rare depicting Lazenby holding skis and his pistol. In good condition (just some pinholes visible in the corners) it sold for £9500 (estimate £1000-1500) at Ewbank’s Bond themed sale titled 007 A Time To Buy in Woking on November 20. “The demand for Bond is stronger than ever,” said Ewbank’s specialist Alastair McCrea after the white-glove sale. “There are so many collectors, and investors are also now seeing it as a prime area to invest in with interest rates being so low.” One of over 800 textile designs created by John Barker of Manchester – £8500 at Tennants.

Barker was meticulous with his work and all his designs are signed and most dated, sometimes including the name of the client and the amount charged. Copies of his obituary that appeared in the Manchester papers of the day were included in the lot. 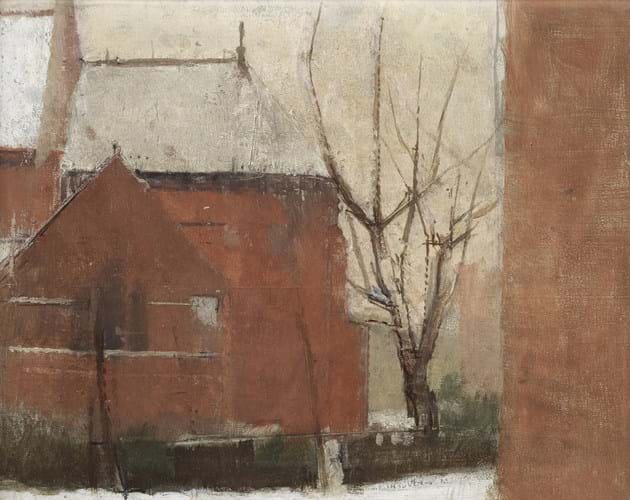 It seems Coldstream painted it from a vantage point 87 Marlborough Mansions, Cannon Hill, where he was living at the time with his parents and his sister Winnie. The covering of snow on the ground moved Coldstream to start painting this view in a single session on January 29, 1947. He painted another view of the church on canvas two days later writing in his diary: “As the snow still lay on the ground I felt some inclination to paint it. I painted again on a canvas [that] I [had] on board looking out of the kitchen window.” According to surviving records for the London instrument makers Smith & Beck, this superb microscope from the brass and glass era was purchased on September 2, 1853 by Francis Herbert Wenham (1824-1908), the British engineer who became a key figure in the improvement of the microscope.

He is credited with inventing the ‘Wenham binocular’ arrangement that was copied by almost all late 19th century microscope makers and made the Ross-Wenham Radial microscope, the largest binocular microscope of the Victorian era.

The Smith & Beck instrument includes a number of modifications, probably made by Wenham himself. According to a letter that accompanied the lot at scientific instrument specialists Flints in Thatcham, Berkshire on November 17, this was Wenham’s prototype binocular microscope which was first exhibited at a meeting of the Microscopical Society of London on December 12, 1860.

Some of the accessories, eyepieces and objectives also appear to be some of Werner’s own creations: the high-power prism was discussed in an extract from the Intellectual Observer (1866) titled Mr Wenham's New Binocular while a 1/25inch objective in a can engraved Wenham and dated 1856 appears to be that mentioned in the 1857 Microscopical Society of London’s President’s address.

At the time, it the most powerful objective ever made.

The microscope was sold by Dollond & Co in 1911, just three years after Wenham’s death, and was in a number of important collections before its sale at Christie's South Kensington in 1993 for a premium-inclusive £10,450.