Forum Auctions’ latest dedicated sale of Banksy (b.1974) prints was a white glove affair with all 24 lots selling and 22 individual auction records set for the editions to which they belong. Offered in the same week as a Banksy-funded boat began rescuing refugees in the Mediterranean, a story that featured prominently in the national news, the auction seemingly benefitted from artist’s ever-growing fame as the street artist from Bristol continues to make waves with virtually everything he does.

London-based Forum have now gained a significant presence in the Banksy market. This has been achieved partly by advertising widely to gain the attention of buyers and sellers, including a series of slots on the front page of the Financial Times, and also by only selling works that are certified by Banksy’s authentication service Pest Control, helping the saleroom gain confidence from collectors in an area where reproductions and fakes abound.

Forum’s ‘Only Banksy’ sale on September 4 was its fifth auction dedicated exclusively to numbered editions by the artist. It raised a hammer total of £1.18m against a £842,000 presale low estimate. 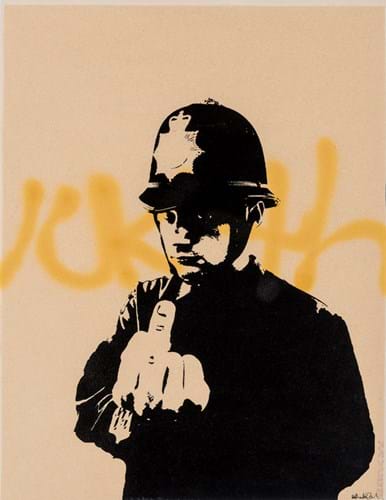 Chief executive and founder of Forum Auctions Stephan Ludwig said: “We have seen rises of around 100% [in this sector] since late 2019. The geography of buyers has also shifted more to Japan and Europe, whereas two years ago it was much more centred on the UK and US.”

This is a market that has become associated with hefty returns and this sale underlined the high rewards available for early investors in particular. Three-quarters of the lots came from vendors who acquired the prints for under £1000 when they were first issued – meaning they received a minimum 22-fold return on the original price judging by the sums fetched at this sale.

In total 12 different vendors consigned works to the auction and Ludwig said one of them had been wanting to sell their print in order to buy a home in France.

Individual Banksy prints have a hierarchy on the market with the more famous images commanding the higher prices. Two of the most sought after made the top prices at the Forum sale: Girl with Balloon and Rude Copper.

Banksy’s first-known image of Girl with Balloon was spray-painted on Waterloo Bridge in 2002, with further murals (sometimes variants) appearing later including on a shop wall in Shoreditch as well as on the West Bank barrier between Israel and the Palestinian Authority. Most have now been covered-up or removed including the Waterloo Bridge original.

Banksy later made a spray paint and acrylic on canvas version of Girl with Balloon that sold for £1.04m (including buyer’s premium) before spontaneously shredding itself during a Sotheby’s auction in October 2018. Arguably this has helped it to become the artist’s most recognisable image.

While copies of the earlier edition, artist’s proofs or the signed edition can make more – the highest at a UK auction is £320,000 for one sold at Christie’s in September 2019 (source: Artprice by Artmarket) – the previous auction record for the unsigned edition of 600 was just under £100,000.

Also estimated at £100,000-150,000 at Forum was Rude Copper, a screenprint in black from 2002 which was part of an edition of 250. Although smaller than Girl with Balloon, measuring 16.25 x 23in (42 x 58cm), this print was signed and stamped with the red Banksy tag as issued and was also ‘hand finished’ with yellow spray paint which added to its appeal.

Offered with a Pest Control certificate, it was knocked down at £125,000 to a UK-based Banksy collector who was bidding online. 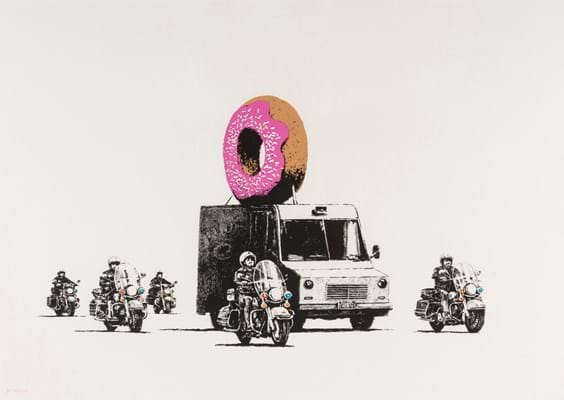 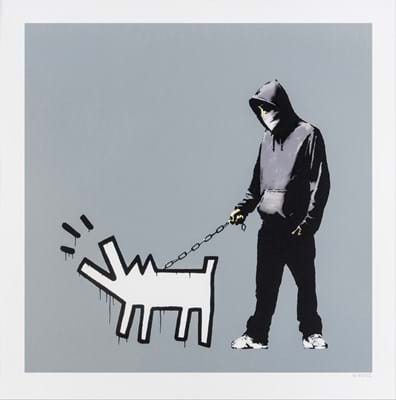 As has been witnessed at other sales held since the UK’s lockdown due to the coronavirus, the fact that the auction was held ‘behind closed doors’ with bidding only available by phone or internet did not seem to affect prices.

Ludwig said: “This sale again surpassed our expectations even though the market has been extremely strong over the past nine months.”

The buyer’s premium at Forum Auctions was 25%.