Bardmony House in Alyth, Perthshire, was originally a staging post for monks and the earliest parts date back to the 15th century. It was sold in June for the only time in 400 years.

Now, the contents are on offer at nearby saleroom Lindsay Burns on August 4-5. The house has various high society connections, being home to the Napier family (descended from Admiral Sir Charles Napier whose 60 years in the Royal Navy included service in the War of 1812, the Napoleonic Wars, Syrian War and the Crimean War, with connections also to the family of the Earls of Mansfield, whose family seat is Scone Palace (the Hon Malcolm Napier married Lady Mariota Napier, daughter of Mungo David Malcolm Murray, 6th/7th Earl of Mansfield).

Urns and much more

Other lots give more of a picture of the family and social life surrounding this grand home, however.

Two 19th century Staffordshire figures estimated at £100-200 depict Sir Charles Napier himself. One is decorated with cobalt blue jacket with yellow, red, black and gilt painted details, the other with orange, black, brown and yellow painted details. They are 15.5in (39cm) and 15.75in (40cm) high respectively. They reflect the fame and public adoration gained by Napier (1786-1860). Estimated at £500-800 is a rare Chinese ivory fan together with its original silk sleeve/case, Qing Dynasty, 10.5in (26.5cm) long, and a ladies cocktail/evening dress, with hand-stitched sequin and ornamentation, bearing Hartnell, 25 Bruton Street, W1 label is guided at £40-80. 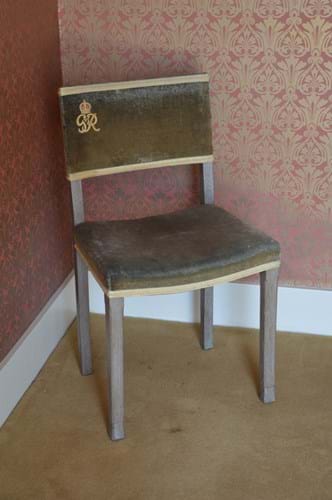 Among the furniture is a George VI limed oak coronation chair, the rectangular velvet upholstered back embroidered with GVIR cipher and crown above a concave velvet upholstered seat. The 2ft 9in (84cm) high chair is estimated at £80-120. For a real taste of the high life you could always bid for a selection of vintage booze – a Jeroboam of Moet & Chandon champagne, in original pine case, is guided at £50-100.