A rare poster promoting a concert a week before the plane crash that killed three of its performers is coming to auction for the first time this weekend. 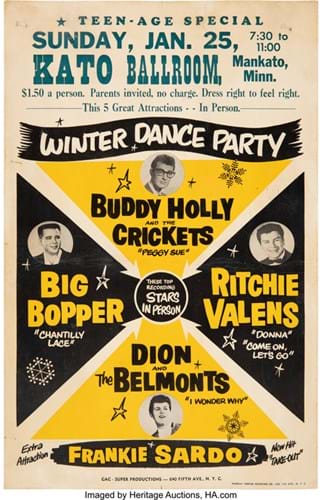 Offered as part of Heritage Auctions’ Entertainment & Music Memorabilia auction on April 4-5, the poster features Buddy Holly and the Crickets, the Big Bopper, and Richie Valens. On February 2, eight days after the concert promoted in this poster, the three acts were killed in “rock-n-roll’s first tragedy”.

Dion (of Dion and the Belmonts) and Frankie Sardo, also featured on the poster but were not aboard the flight.

The poster for the January 25 Winter Dancy Party tour stop in Mankato, Minnesota is a highly collectable piece and has an estimate at this week’s sale of $50,000-100,000.

Heritage Auctions specialist Pete Howard says it is “arguably the best and rarest rock concert poster of all time”.

He adds: “Only 11 shows happened before the plane crash, and only three posters are known to exist from those shows … and this is the first one ever sold at auction.”

It was pulled off the wall by a teenage attendee of the concert as she filed out of the ballroom and comes with a letter of provenance from this original owner.