ATG’s selection of hammer highlights this week includes a pair of Napoleon III boulle marquetry cabinets that sold for five-times over estimate and a 19th century portrait miniature that made 13-times estimate. By tradition this early 19th century portrait miniature offered for sale at Tennants in Leyburn on January 11, depicts the Irish naval officer Sir Henry D'Esterre Darby (1749-1823). To the reverse is a crystal retaining a lock of hair.

The image (perhaps based on a half-length portrait of Darby painted by Sir William Beechley in 1801 and later sold as an engraving) shows the subject wearing a Nile medal – a reference to the Battle of the Nile in 1798 where Darby had command of HMS Bellerophon. Some 49 Bellerophon crewmen were killed and 148 wounded during the battle with Darby himself rendered unconscious with a head wound.

After the final day of fighting on August 3, Nelson (who had also received a serious head wound) wrote to Darby saying: ‘My Dear Darby, I grieve for your heavy loss of Brave fellows, but look at our glorious Victory. We will give you every assistance as soon as you join us, till then God Bless You. We shall both, I trust, soon get well.’ Popular in the first decades of the 19th century, the eight-key flute is something of a transitional instrument – one which retained much of the characteristics of the earlier baroque flute but also featured elements of the modern instrument.

Among the best-known makers at the time was Rudell & Rose, a partnership between the London flute player and instructor George Rudall, and Edinburgh wind instrument maker John Mitchell Rose that thrived from 1821-50.

Interest in the eight-key flute as an orchestral instrument waned in the Victorian period in favour of the ‘modern’ flute based on the designs of Theobald Boehm of Bavaria. However, the eight-key flute did remain popular with folk musicians. Since the revival of Irish music in particular in the 1970s they have been eagerly sought after.

Only occasionally are Rudell & Rose eight-key flutes seen at auction. The example here, in rosewood and white metal with the Rudell & Rose Patentees boss to one end, was offered by Battle auctioneer Burstow & Hewett on January 8 with an estimate of just £30-50.

Plenty of bidding followed before it went to an internet bidder using thesaleroom.com at £1800. A mixed media sketch of Marlon Brando by Bob Peak, £13,000 at Ewbanks.

The sale at Ewbanks in Surrey on January 9 included items from the estate of American film producer Elliott Kastner (1930-2010) whose credits included Where Eagles Dare (1968), The Long Goodbye (1973), The Missouri Breaks (1976) and Angel Heart (1987). The majority of the items were kept in his office at Pinewood Studios.

Pictured here is the original artwork used in posters to promote The Missouri Breaks. The 2ft x 3ft (61 x 91cm) paper on board mixed media sketch of the lead actor Marlon Brando by the influential American commercial artist Bob Peak (1927-92) was used on both single sheet and British quad posters. 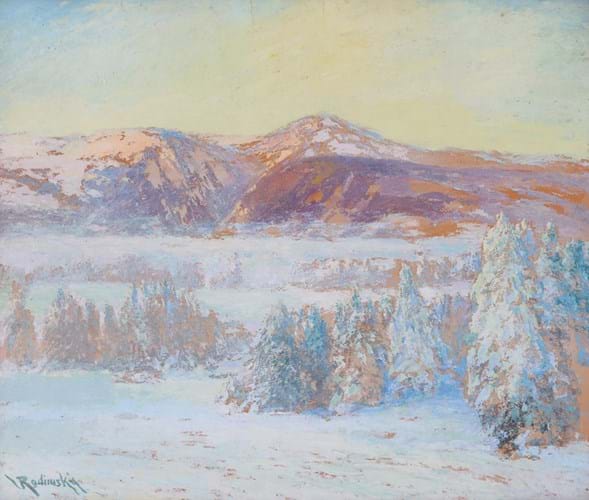 This winter landscape is signed lower left for Václav Radimský (1867-1946), the artist credited with introducing Impressionism to the Czech public. Born in Kolín in Bohemia, he studied in Vienna and in Munich before moving to Paris where he came under the spell of Claude Monet.

Accompanied by a substantial catalogue, an exhibition of his work held at the Municipal Library in Prague from October 2011-February 2012, has done much to re-establish his reputation.

This 60 x 71cm oil on card came for sale at Chiswick Auctions on January 13 with an estimate of £80-120 but was eagerly competed before it sold to an internet bidder using thesaleroom.com at £3600.

Benefiting enormously from the ‘power of the pair’ they were also better quality than much French revivalism with marble tops, crisp ormolu mounts and detailed brass and tortoiseshell marquetry work. The blue boulle panels to the pilasters were also unusual while the interiors were veneered in mahogany. 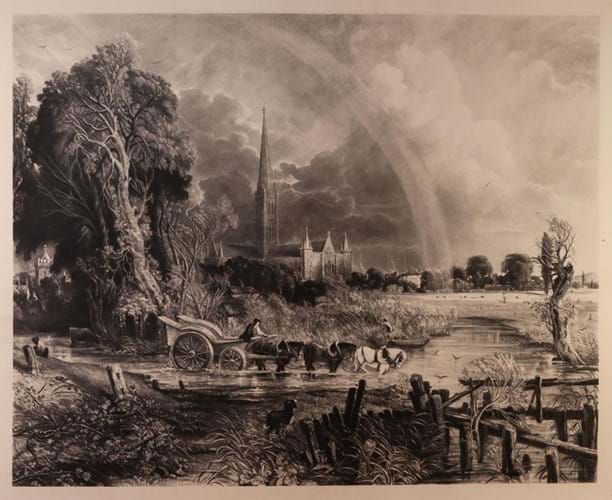 ‘The Rainbow, Salisbury Cathedral’, a mezzotint by David Lucas after John Constable, £850 at Capes Dunn.

Although loosely catalogued and estimated at just £30-50, this mezzotint after John Constable reached £850 at Capes Dunn in Stockport on January 14.

It was identified as one of the original suite of 22 prints produced by the engraver David Lucas (1802–81) between 1829-32 as part of the portfolio titled Various Subjects of Landscape, Characteristic of English Scenery. The project, a riposte to the Liber Studiorum, Turner’s mezzotints of foreign landscapes, was fraught with difficulties as Constable, in failing heathy, frequently reworked the plates to their dark and brooding conclusion. In one instance as many as 200 ‘progress’ proofs were made of a single image.

This 21in x 2ft 3in (55 x 68cm) image on wove paper is known as The Rainbow, Salisbury Cathedral. Housed in an ebonised frame, it carried a later inscription dated 1917 to the gilt slip. The winning bidder came via the saleroom.com.