What lots caught bidders’ eyes in the last week? Five auction highlights including a silver spoon from 1528 that drew spectacular bidding

ATG’s selection of hammer highlights over the past week include a Henry VIII apostle spoon making ten times estimate at an auction in Leicestershire, and a huge Minton majolica urn bringing similar levels of competition in Ireland. An apostle spoon marked for William Simpson, 1528 that sold for £6000 at Gildings.

This early English apostle spoon was part of a private collection of English and Continental silver offered for sale by Gildings of Market Harborough, Leicestershire on March 5.

Although catalogued as 17th century (the marks were rubbed) and estimated at £400-600, it was spotted by many as a much rarer survivor from the reign of Henry VIII.

Marked for the specialist spoon maker William Simpson, 1528 and cast with now much rubbed finial of St Philip, it sold at £6000.

Silver spoons with finials in the form of the Apostles – each with his identifying emblem – were commonly owned by the wealthy gentry or merchants of Tudor and Stuart society.

A full set would have included a ‘master spoon’ representing the figure of Christ. This massive 3ft (92cm) high majolica urn – a riot of grotesque masks, mythical figures and other motifs drawn from Renaissance sources – combines the talents of two key figures in the history of the Minton factory.

It was probably modelled by Pierre Emile Jeannest (1813-57), the French sculptor who worked in Stoke-on-Trent for a few years in the wake of the 1848 revolution, and painted by Thomas Kirkby, the factory artist who produced some of Minton’s first exercises in ‘maiolica’ style decoration.
It was included in Fonsie Mealy’s March 5 sale of the contents of an impeccable 1820s period residence with one of the most recognised addresses in Ireland – the Oxmantown Mall development in Birr, Co Offaly. Ackworth School needlework sampler from 1810 that sold for £6500 at Kingham & Orme.

Many of these 'medallion' designs, worked as gifts to classroom friends with motifs perhaps taken from watch papers, now form part of the extensive school collection including the large polychrome example by pupil Sarah Moon dated 1791 sold at Tennants in 2006 for £8500.

The 13in (32cm) square example offered for sale at Kingham & Orme in Evesham on March 1 was from a generation later – worked with a typical array of stylised and naturalistic foliate motifs and the words Mary Hart, Ackworth School 1810. It was estimated at £1000-1500.

Part of the appeal of Ackworth samplers is the survival of many early records so Ms Hart (who attended the school from 1806-11) will doubtless be the subject of future research after the sampler sold for £6500. 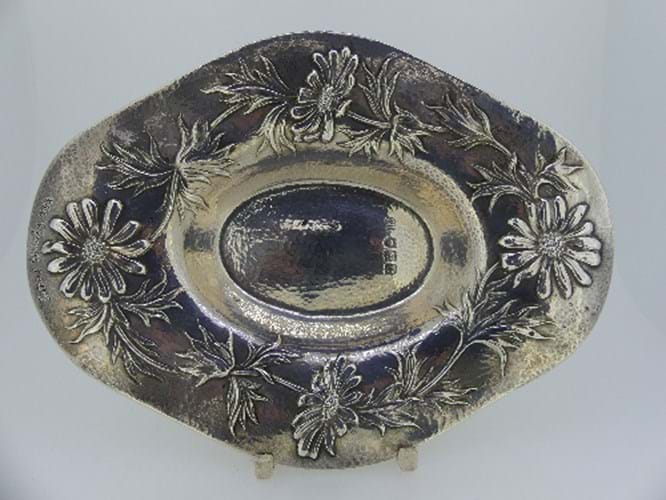 Gilbert Leigh Marks (1861-1905) is ranked among the foremost silversmiths of his generation. Having learnt his trade with London firm Johnson, Walker & Tolhurst – who later hosted his exhibitions – he registered his own mark at Goldsmiths' Hall in 1896.

Due to his untimely death following illness in 1905, it is generally thought that Marks produced fewer than 800 pieces during his career.

This typical 7in (17cm) lozenge form dish, hand planished and embossed with scrolling chrysanthemum leaves and flowers, is hallmarked for London, 1898 and also bears Marks’ facsimile signature. Estimated at £800-1200 at Chilcotts in Honiton, Devon on March 2, it sold for £2300.

This Royal Navy Officer’s Medal awarded to John Gaze who was serving as Quarter Master of the 36-gun frigate HMS Nymphe during action in 1793 – £32,000 at Bosley’s.

It was awarded to John Gaze who was serving as Quarter Master of the 36-gun frigate HMS Nymphe when at 6.30am on June 18, 1793 she engaged the French frigate La Cleopatre at Start Point in Devon. After La Cleopatre was dismasted and her wheel smashed, Captain Edward Pellew, 1st Viscount Exmouth, gave the order to board the ship and begin hand combat on the main and quarter decks.

Only four of these Nymphe clasps were awarded. This example appeared for sale at specialist militaria auctioneer (estimate £15,000-20,000).

After his deeds on HMS Nymphe, John Gaze would later follow his captain onto the famous HMS Indefatigable receiving further clasps for Indefatigable 20 April 1796 and Indefatigable January 13 1797 (Midshipman) and Algiers (Master of the Queen Charlotte).