A full house, a good balance between trade and private buyers and happy stall holders: Adams Antiques Fair in Victoria, London is doing something right. ATG went along to its latest event to find out what. In a venue built in 1904 for floral exhibitions, the first two hours of the Sunday, January 20 edition of Adams Antiques Fair in Victoria, London felt like a hothouse.

Business at 144 stalls in the Royal Horticultural Halls' Lindley Hall was fast and furious as private and trade buyers headed straight for their preferred dealers who stall out regularly at this monthly event.

Things calmed down by around 12pm as a more leisurely pace of trade took hold.

Jewellery and silver stalls dominate, though fair founder and owner Matthew Adams tells ATG he tries "to keep it as mixed as possible, but it does attract people who sell small antiques.

"We also aim for a wide price range, so for instance there’s silver on sale here today for £13 right up to £13,000, and everything in between".

Starting at a competitive £135 including VAT per stall, every pitch tends to be booked each month, says Adams, though not all dealers can take up their pitch each time.

On January 20 there were eight fair newcomers among several that ATG recognised from Clarion Events' Art & Antiques for Everyone, Portobello Road, and IACF's Newark, Alexandra Palace and Ardingly fairs.

“Casual traders don’t get the same location each time,” says Adams, who was a dealer himself for 10 years. “They know they have to move around until they get a regular slot.” 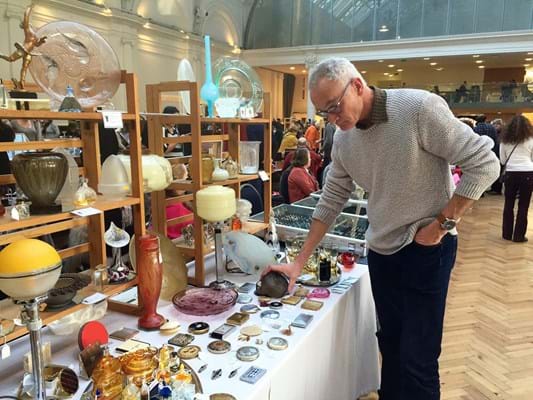 Though it is staged on a Sunday, consensus is that Adams is more a trade event than public, and ATG witnessed some serious inter-dealing going on, with objects moving from stall to stall.

That said, ATG talked to many private buyers who love the event’s central location and light-infused venue (see gallery, above).

Time out for time's up

Adams believes he has cracked the issue of early-leaver stall holders. “About five minutes before we close at 4.30pm, when rents have already been collected, we put every stall holder’s name into a hat and my grand-daughter pulls a name out," Adams says. "If that exhibitor hasn’t started wrapping and packing up, they get their rent back!"

The raffle's incentives are that dealers are encouraged to trade right to the end and a lucky one of them recoups their stand costs.

"People buy right up to the end, you know, having mulled their purchases for a while, and are inspired to finally purchase when they know time’s up,” Adams says.

Marchant and the British Museum head for Art Antiques London