Sotheby’s has been sold to BidFair USA, a company owned by media and telecom entrepreneur and art collector Patrick Drahi. 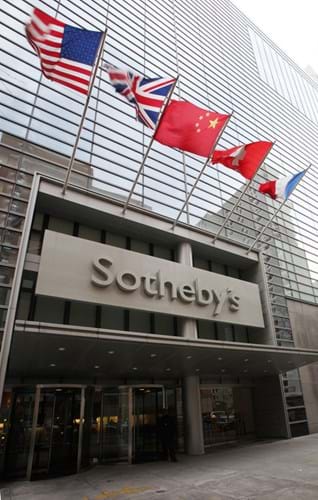 Under the terms of the agreement, which was approved by Sotheby’s board of directors, shareholders will receive $57 in cash per share and the price represents a premium of 61% to Sotheby’s closing share price on June 14, 2019.

The transaction means Sotheby’s is returning to private ownership after 31 years as a public company traded on the New York Stock Exchange.

Tad Smith, Sotheby’s CEO, said, “Patrick Drahi is one of the most well-regarded entrepreneurs in the world...  Known for his commitment to innovation and ingenuity, Patrick founded and leads some of the most successful telecommunications, media and digital companies in the world.

"He has a long-term view and shares our brand vision for great client service and employing innovation to enhance the value of the company for clients and employees."

Smith said the deal will mean Sotheby’s will be able to “accelerate the successful programme of growth initiatives… in a more flexible private environment”.

He added: “I strongly believe the company will be in excellent hands for decades to come with Patrick as our owner.”

Drahi said: “Sotheby’s is one of the most elegant and aspirational brands in the world. As a longtime client and lifetime admirer of the company, I am acquiring Sotheby’s together with my family.”

The transaction is expected to close in the fourth quarter of 2019 following shareholder approval.

With Patrick Drahi becoming the latest owner of the 275-year old firm, Sotheby’s will soon no longer oldest company listed on the New York Stock Exchange. Here is a brief history of the firm.

Sotheby’s founder, bookseller Samuel Baker, held his first auction under his own name on 11 March 1744. The dispersal of “several Hundred scarce and valuable Books in all branches of Polite Literature” from the library of Sir John Stanley fetched £826.

The firm had added the name Sotheby’s by 1780 when John Sotheby (Baker's nephew) became associated with the firm that by then had become known as Leigh & Sotheby.

The last of the Sotheby family died and partner John Wilkinson takes over as head of the business.

Edward Grose Hodge was promoted and restyled the company ‘Sotheby, Wilkinson and Hodge’ – the name it carried until 1924.

The company moves to Bond Street from its previous saleroom in Wellington Street, just off the Strand in London. The frontage of Sotheby’s in New Bond Street where the auction house has been based for over 100 years.

Sotheby’s opens a US office.

Sotheby’s goes into public ownership for the first time with shares over-subscribed by 26 times.

A. Alfred Taubman, a self-made billionaire from Michigan whose fortune came from shopping malls, real estate and root beer, purchased Sotheby’s in 1983. He acquired Sotheby's for a reported $125m at a time when the company was loss-making and struggling financially.

Sotheby's went public again and the company's shares were listed on the New York Stock Exchange (the firm became the oldest publicly traded company on the NYSE).

In early 2000, news emerged of investigations into alleged price-fixing and anti-competitive practices not just in the US but also in the UK, Europe and Australia. Taubman resigned as chairman of Sotheby's in February at the same time as chief executive Diana 'Dede' Brooks quit the company.

Sotheby’s is sold to BidFair USA, a company owned by media and telecom entrepreneur and art collector Patrick Drahi.