Chelsea and Mayfair are two major centres for the art trade, particularly in the summer when events like Masterpiece and London Art Week (respectively) arrive. Among the events to visit this weekend is the Royal Academy Summer Exhibition which includes more than 1500 works and runs until August 12.

As the season gathers speed, check out some of the capital’s major exhibitions and get a sneak preview of some top auction lots before they go under the hammer. In 1838, pioneer photographer Willian Henry Fox Talbot said: “I believe that this new art will be a great help to botanists.” Bloom…away, an exhibition of early botanical photography from 1850s-1960s, provides compelling and often beautiful evidence that he was correct. The show takes place at The Studio at 73 Glebe Place, London. It is the first show by Sarah Wheeler, former Bloomsbury Auctions’ photography specialist, who set up Sarah Wheeler Gallery last year to focus on vintage photography.

It runs until June 19. To visit this weekend email to arrange a viewing, contact sarah@sarahwheelergallery.com Among the works on show at the Royal Academy Summer Exhibition, which runs until August 12, is this sculpture by Hew Locke.

Love it or hate it, the Royal Academy’s Summer Exhibition is one of the largest and longest running show of contemporary art, compiled through open submission. The resulting show offers visitors a wealth of new works, mostly for sale, from British and international artists. Jock McFaden coordinated the 251st edition, which features more than 1500 pieces. Look out for the ‘menagerie’ in the Central Hall as well as works by Banksy and Anselm Kiefer. Also keep an eye out for the one- and four-star reviews the controversial show has sparked in the national press. The show runs until August 12. During the London Festival of Architecture Piccadilly, St James’s will be dressed for the occasion with flags designed by architectural practice, Rogers Stirk Harbour + Partners. There will also be an associated exhibit to the banners held in the St James’s Church gardens. The events are organised by Heart of London (the business district representing St James’s, Piccadilly Circus, and Leicester Square). The festival runs until June 30. This Matisse still life from the collection of Enrico Donati is estimated at £4m-6m at Sotheby’s New York on June 19 and may be viewed at the auction house until 3pm that day.

Vase d’Anémones by Henri Matisse is part of Sotheby’s Impressionist and Modern evening sale on June 19. With an estimate of £4m-6m, it’s a good idea to try before you buy (or at have a look while it’s still around) and this weekend kicks off a series of viewing opportunities at the Mayfair auction house. It remains on display until 3pm on June 19.

…and the George Oritz Collection at Christie’s 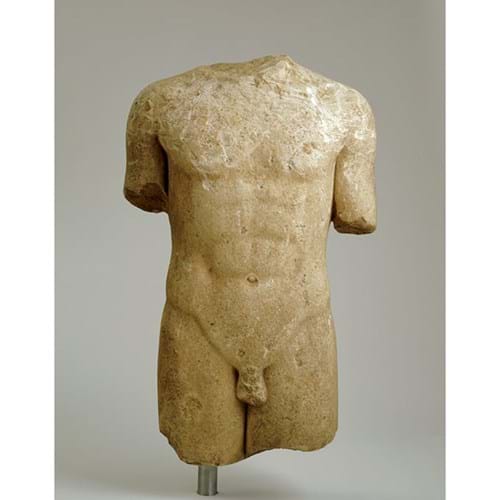 One of the highlights of the George Oritz collection on display at Christie’s is this Greek marble kouros torso. The show continues until July 12.

A non-selling show of highlights from the George Oritz (1927-2013) collection runs at Christie’s until July 12, marking the 25th anniversary of his exhibition at the RA. Oritz created an important private collection of ancient art, which spans the ancient Near East to the Pacific world with ancient Greece as its main focus. Frank Dolphin’s dry point etching Lizard is available at Sotheran’s for £75. The show of his works runs until July 4.

Also in Piccadilly, Henry Sotheran’s Rare Books and Prints hosts an exhibition of the works of contemporary artist Frank Dolphin until July 4. He has exhibited his colourful, somewhat abstracted prints in New York, Paris, Poland as well as in London’s Bankside gallery. The collection in question was inspired by Japanese prints and are influenced by landscape.