Russian art specialists MacDougall’s is marking 15 years since holding its first auction in London and has announced that its upcoming sale on June 5 will have a total estimate of £8.5m. 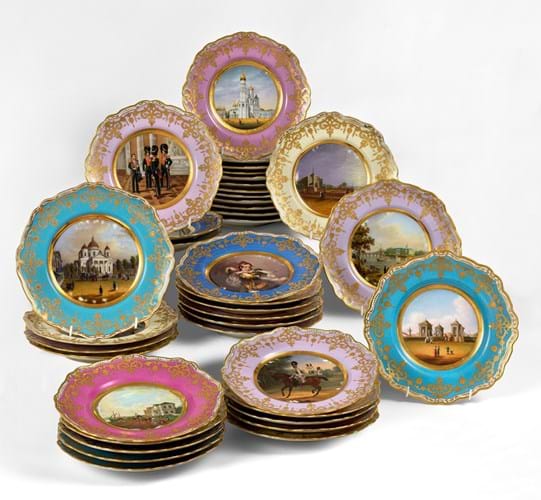 The 309 lots of pictures and works of art will take place at Asia House in New Cavendish Street and will offer a mixture of modern and traditional works.

Not too many auction houses in the UK can put together auctions with such high presale values but MacDougall’s have managed to carve out a significant niche in a lucrative sector of the art market.

Since launching in London, the firm has grown its presence to the extent that, according to the saleroom’s figures, it achieved a market share of close to 30% for Russian paintings sold at the biannual auction series in London last year (only behind Sotheby’s).

While the Russian art market in London has been recovering since the major downturn a decade ago, the two dedicated sales series held in June and November every year remain active and competitive, with high-priced sales of individual works always a notable feature.

What will be the stars of summer 2019? Here are six key offerings that MacDougall’s will be hoping will bolster the totals at London’s upcoming ‘Russian week’. Works by Russian painter and stage designer Boris Kustodieva (1878-1927) have sold for over £1m at London auctions on a number of occasions including a portrait of his daughter Irana that made a premium-inclusive £1.84m at MacDougall’s in June 2011.

At the current series, the auction house will offer Bakhchisarai with an estimate of £1.2m-1.8m. Painted in 1917, the 2ft 8in x 3ft 1in (81 x 94cm) signed oil on canvas depicts a Tatar bazar in Crimea where the artist had spent two months on a trip two years earlier. MacDougall’s described it as “the artist's only large-scale homage to an Oriental theme”. Offered at auction for the first time, Young Dreams (Tsesarvich) by Viktor Vasnetsov (1848-1926) depicts Dmitry, the son Ivan the Terrible and the last Tsarevich from the Rurik dynasty is thought to have been murdered in 1591. The 3ft 6in x 2ft 2in (1.07m x 67cm) oil on canvas dates from 1918 and, according to MacDougall’s “echoes the fate of Nicolas II and his young son” who was executed that year in the Bolshevik Revolution. 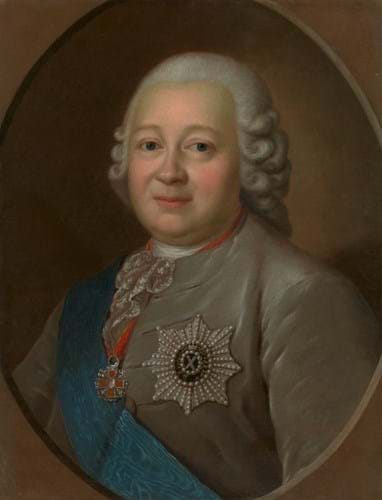 This portrait of Count Nikita Ivanovich Panin, the Russian statesman and diplomat who was a member of Catherine the Great’s inner circle, by Fedor Rokotov (c.1735-1808) is believed to have been painted in 1766-67, when the artist was also working on the Empress’s coronation portraits intended for Russian embassies abroad.

Among the large-scale pictures at MacDougall’s is a rare life-size portrait of a Chinese figure by Alexander Yakovlev (1887-1938). The full-length study from c. 1918 was executed in sanguine, charcoal and crayon on paper and measures 5ft 1in x 2ft 1in (1.55m x 64cm).

It was described by the auction house as “a superb example of his precise and swiftly executed portraits from the first Far Eastern trip in 1917-1919”. This portrait of Alexander Bozheryanov by fellow artist Yury Annenkov (1889-1974) comes from his best known series of works on paper created in Petrograd in 1921.

Annenkov (also known as Georges Annenkov) took up portraiture in earnest 11 years earlier but, after gaining a few private commissions, he received an offer in 1921 from the publishers Zinovy Grzhebin and Yakov Blokh to produce portraits of several contemporary writers for their forthcoming books. The ostensibly one-off job generated momentum for a whole series of portraits of his contemporaries, and this ink and collage on paper depicting his friend was one. Other portraits in the cycle depict musicians, actors and members of Soviet government and they rarely appear on the market. 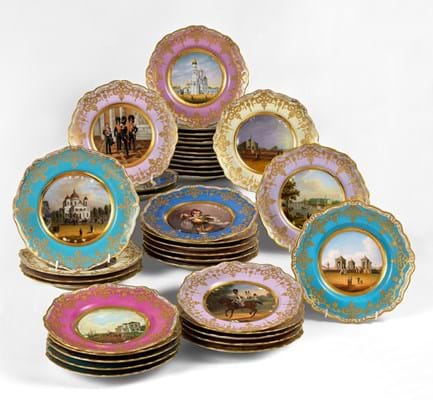 A collection of over 60 dessert plates from the dowry service of the daughter of Tsar Nicholas I, Grand Duchess Alexandra Nikolaevna (1825-1844) for her wedding in 1844 to Prince Frederick William of Hesse Kassel (1820-1884).

The group, manufactured at the Imperial Porcelain Factory, remained in the collection of Landgrave of Hesse-Kassel after Alexandra’s death and has come to auction from ‘an important private collection, Europe’ according to the catalogue.

The pre-auction exhibition will open in London on June 1.