It may have been rusty, damaged and lying in a garage in a state of disrepair but a pre-war clockwork toy train set still sold for a hammer price of £6500 at a Cumbrian auction house. 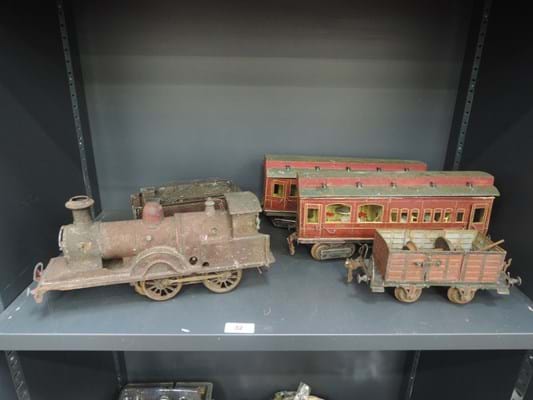 The early 20th century Marklin Gauge 1, Midland Railway locomotive with a tender, two carriages and a wagon was discovered by 1818 Auctioneers during a Kendal house clearance.

Offered in the May 7-8 two-day Collectors Auction in Milnthorpe, the estimate of £300-500 was left far behind. 1818 collectables expert David Hunter said: “There was a lot of interest in it – we had phone, commission and online bids and it eventually went to a collector in Holland. We are chuffed to bits with the result.”

He added: “We were called in to clear the house of a wealthy local businessman. When we got everything back to our saleroom at J36 Auction Centre the team carefully checked all the boxes. It’s pain-stacking and dusty work and looks can be deceiving, particularly in the case of this train. It was rusty, two of the wheels from the locomotive weren’t attached and it must have been a favourite toy at some time given all its wear and tear.

“It would have been a top train set when new, the most expensive you could buy in the 1900s. It was probably the most valuable item from the house and it could have been so easily over-looked.” Another train from the same house clearance also sold well. It was a gauge 1 live steam Midland Railway 0-4-0 Locomotive and tender which made £1000 against an estimate of £150-200.

Large-scale (Gauge 1) toy trains from 19th century German manufacturers Marklin and Bing are sought after. Before Hornby in particular began making such models in Britain, in O Gauge, the German makers were dominant.

Unrestored, untouched condition can be vital to many buyers. On March 6 the Burstow & Hewett saleroom in Battle, Sussex, sold a Gauge 1 live steam-powered tinplate 4-4-0 steam locomotive and tender, catalogued as ‘early 20th century, probably Marklin or Bing’, offered with two Bing tinplate passenger and guard carriages of the same gauge, sold for £2700 (estimate £500-1000). Other recent impressive surprise results for toy trains included the £8000 (plus 18% buyer’s premium inc VAT) that was paid for a smaller Marklin, a HO gauge T 700B with box, at the Rogers Jones auction in Cardiff on March 2 – demolishing the guide of just £40-70.

A toy engine offered at North Yorkshire saleroom Tennants (20% buyer’s premium) sold for what is thought to be a new world record for a Hornby Dublo locomotive in November last year. The 0-6-2T Southern 2594 locomotive had been estimated at £400-600 but made £6000.