From Cartier rings at auction in Knightsbridge and talks over wine at the Goldsmiths’ Hall to a guided tour of Syon Park, find out about the latest jewellery-related events this month. This 1970 Burmese pink sapphire and diamond stylised flower brooch is by Michael Gosschalk. It carries an estimate of £3000-5000 at Bonhams auction on July 10. 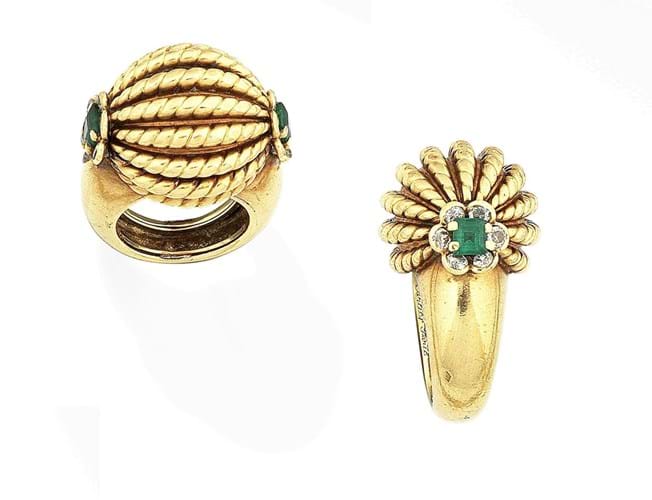 Auction house Bonhams is offering a variety of gems and jewels at its latest jewellery auction in Knightsbridge on July 10. Among the highlights selected by jewellery specialist Jemima Chamberlain-Adams is this emerald and diamond bombé ring by Cartier c.1960 which is estimated at £3000-£4000. A chance to mix gems and wine is on offer at The Goldsmiths' Hall on July 16. Sang de Pigeon: Rubies & Shiraz is a chance to hear from jewellery and gem specialist Joanna Hardy and wine-maker Michael Hall.

Hall and Hardy worked together as jewellery specialists in Geneva before Hall pursued his dream to become a winemaker in 2001.

Hardy will talk about her book Ruby: The King of Gems and the event will feature wine tasting of Michael Hall wines. Hardy is a liveryman of the Goldsmiths' Hall, a fellow of the Royal Society of Arts and appears on the BBC’s Antiques Roadshow.

Hall produces wine from 10 acres of vineyards in Barossa Valley and the Adelaide Hills in Australia.

The event is sponsored by Great Wine Estates and places are limited. The session at 3.30-5.30pm on July 16 includes canapés but places are very limited and offered on a first come first served basis. Please contact: georgina@joannahardy.com Mayfair jewellery dealer Hancocks has a number of items on show this month at its Burlington Arcade boutique. One highlight is this Art Deco ruby and diamond ring by Chaumet c.1935 offered for £38,500.

Ruby is the birthstone for July and Guy Burton of Hancocks London said: “Known as the King of Gemstones, rubies are far rarer than colourless diamonds and are very much the jewel du jour.” Auction house Fellows is holding two events this month and is offering ATG readers a discount on tickets (subject to availability):

Includes a private guided tour of the house and a talk from Art of Mourning’s Hayden Peters exploring the sentimentality of jewellery over the last 500 years and the hidden meaning behind certain objects. The event is held in conjunction with Historic Decoration. Tickets: £100 (usual price £120).

Mourning jewellery expert Hayden Peters will be exploring mourning jewels made by the goldsmiths of 18th and 19th century Birmingham, London and Chester. Tickets: £30 (usual price £35).

Email hello@fellows.co.uk for tickets at the ATG discounted prices.

Rich seams for dealers and auctioneers from Portuguese ‘golden period’