It was a case of little and large at Sotheby’s last night as an enormous work by Jenny Saville (b.1970) and a small portrait by Lucian Freud both sold at the firm’s latest Contemporary art evening sale in London. The performance of the two lots however, neither of which generated spectacular competition, seemed to sum up the sale in general.

Although 60 of the 66 lots sold on the night (91%) – a high sell-through rate by any standards – not many works sold significantly above estimate and the overall hammer total of £77.9m (£93.2m including premium) was towards the lower end of the £76m-104m pre-sale estimate.

Although it was not the strongest auction in this category the auctioneers have staged in the capital, Sotheby’s pointed out how Jenny Saville’s nude entitled Juncture fetched a 1000% increase on the £457,250 (including premium) the painting had sold for on its last appearance at auction at Christie’s in February 2009.

The 3-metre high oil on canvas from 1994 had an estimate of £5m-7m, a level that no doubt reflected the way the market has expanded over the last decade as well as the fact that her auction record has been broken three times in the last two years, each time for pictures painted in the “critical” five-year period between 1992 and 1997 when Saville produced a series of these monumental paintings.

Even though Propped set a record £9.54m (including premium) at Sotheby’s in October – an auction record for any living female artist – the estimate here was deemed punchy for a work that was less full-frontal and arguably more unwieldy.

Ahead of the sale, the auctioneers had arranged a third-party guarantee and, on the night, it drew seemingly no interest other than a lone phone bidder (presumably the guarantor) who secured it below estimate when it was knocked down at £4.8m.

Elsewhere at the sale, an early Lucian Freud (1922-2011) head study came to auction directly from the sitter’s collection. The 7in (18cm) square oil on canvas from 1956 depicted the late Guinness family heir and arts patron Garech Browne who died last year. 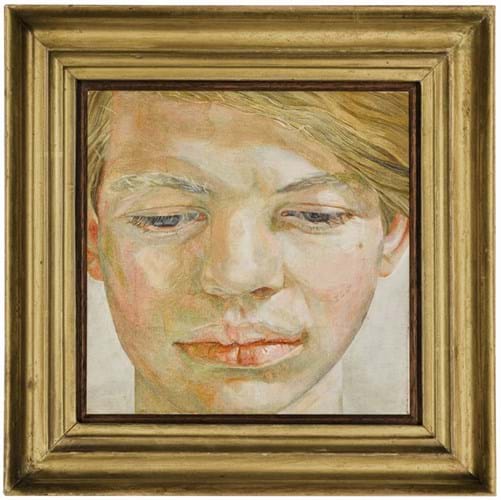 The sale was led by Jean-Michel Basquiat’s (1960-1988) Apex, an acrylic, oil stick and Xerox collage on canvas from 1986 that was offered with an unpublished estimate and was knocked down to a European private buyer at £7.05m.