Five medals and militaria auctions are included in a look at recent highlights from this ever-popular collecting field. Photo from a Gallipoli campaign album sold for £3000 by C&T at a Kent auction, showing a Royal Navy bluejacket inside the muzzle of a 15in gun on HMS Queen Elizabeth. Anzac Day last week is the annual reminder of Australian and New Zealand war dead and has particular relevance to the 1915 Gallipoli campaign.

Australians in the trenches during the doomed attempt to knock Turkey out of the First World War were among the subjects in an ‘exceptional’ photo album of the campaign sold also last week for a hammer price of £3000 (plus 20% buyer’s premium) against an estimate of £700-900 at C&T’s Military Books, Ephemera and Photographs auction held in Tunbridge Wells, Kent.

The 168 photographs in all are very well captioned and are very sharp. Images include Landing Party at Mudros bay, Turkish sniper, wounded Turks, Field Surgery, Crew of HMS Submarine E11, In the Trenches-Anafarta, Dead Turks in the Trenches, Australians in their Trenches, Armoured cars, W Beach, Turkish Officers being questioned, View of Gully ravine, Indian Mule Transport and many more.

Another fascinating lot sold by C&T on April 24 was an Air Training Auxiliary (ATA) pilot’s flying log book to Lesley Cairns Murray, killed in a crash while fying a Hudson aircraft on April 20, 1945, as also covered in an ATG hammer highlights selection. The female ATA pilots provided a vital role in ferrying aircraft around but not in combat.

This medal showing Admiral Vernon and the Capture of Portobello sold for £6000 at a Dix Noonan Webb auction.

A large collection of medals relating to Admiral Vernon, the British naval commander who became a popular hero in England and the American colonies, was billed by the London auction house Dix Noonan Webb as one of the biggest ever put together.

The Merchant of the Islands collection contained more than 120 different varieties and was be offered in a sale of Coins, Tokens and Historical Medals on April 24-25.

A rarity in the group estimated at £600-800 was an unpublished and possibly unique medal showing Admiral Vernon and the Capture of Portobello, which sold for 10-times top estimate at £6000 hammer (plus 20% buyer’s premium).

The unsigned medal dates to 1739 and is made of ‘pinchbeck’ metal – a form of brass that closely resembles gold in appearance. It bears the motto brave Vernon made us free. Vernon captured the Spanish port of Portobello (now in Panama) with only six ships in 1739. The feat made him a hero with many medals struck to commemorate it – more different medals were struck of Vernon than of any other 18th century Englishman. Medal groups on offer at auction are sometimes sold as family groups – for example, to a father and son who both served in the military. Such a group was bought for a hammer price of €8000 (£6900), plus 22% buyer's premium inc VAT, at Irish saleroom Fonsie Mealy on April 16.

The auction house says this combination is “possibly unique as an Irish father and son medal collection of both world wars”. It was offered as part of the Fortgranite Baltinglass sale, home to the Dennis family of Co Wicklow since 1810.

Various other lots connected to father and son included Edward’s collection of uniform jackets sold for €2400.

Around the world at Spink 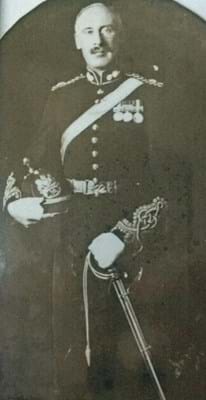 The somewhat bewildering number of colonial wars Britain and its empire were involved in during the 19th century throw up various unusual medal combinations of interest to collectors.

While the Indian Mutiny is well known, how many people have heard of the Riel Rebellion of 1885 in Canada? It was the second revolt led by Louis Riel (the first was in 1869-70) of the Métis people of mixed Native American and European ancestry.

An Indian Mutiny and North-West Canada Campaign pair of medals awarded to Major-General TB ‘Gunner Jingo’ Strange, a colourful officer who was considered the ‘Father of the Canadian Artillery’, sold for £24,000 (plus 20% buyer’s premium) against an estimate of £3000-4000 at the Spink auction on April 10-11. He commanded the Alberta Field Force during the 1885 rebellion.

His son, Lieutenant-Colonel HB Strange, Royal Artillery, served as ADC to his father during the 1885 rebellion, and later served on the staff during the Boer War. His medals were sold as a separate lot in the same auction, for £5000.

Both lots were previewed in ATG No 2387. They had been consigned by a direct descendant. Further Spink highlights included the medal group of three to Private Christopher Chapman, 11th Light Dragoons. Having acted as Wellington's orderly at the Battle of Waterloo on June 18, 1815, Chapman was specially chosen by the Iron Duke to be his valet, a role he ably fulfilled until Wellington's death in 1852.

Another famous action – the defence of Rorke’s Drift against the Zulus in 1879 – produced an impressive auction result. Among a family group were three miniature dress medals worn by Garrison Sergeant-Major HE Gallagher, 24th Foot (South Wales Borderers), who commanded the south barricade at Rorke's Drift and was the second-most senior NCO present on that famous occasion, immortalised by the film Zulu.

The group as a whole made £5000 against an estimate of £600-800. Full-size medals related to Rorke’s Drift will make much more, however. This flintlock fowler was just one handsome example of the many spectacular items boasting provenance from the Firearms & Militaria Collection of Robert Spangler, of West Chester, Pennsylvania. The musket appeared to have been assembled from both US and European military parts: the lock is European, while the stock appears to be early French with a long wrist, and the butt stock is branded United States.

Original wartime flags can be rare because of their fragile nature but an American Civil War US Company H 4th Artillery silk flag was preserved in a frame. It sold for $2074 (£1580). The unit saw action in the Union army at battles including Shiloh and Chickamauga.