Two watercolours by John Singer Sargent (1856-1925) that have been in a private American collection for nearly a century have emerged will be offered at an auction in Boston this week. One of them was described in the artist’s catalogue raisonée as “one of the most subtle and beautiful of Sargent’s architectural studies”. They both date from a period when the artist turned away from painting the high-society portraits that had earned him fame and fortune, and instead devoted himself to producing scenic views as he travelled throughout Europe and the Middle East.

The two works will appear at Skinner's sale at 63 Park Plaza, Boston on May 10.

The architectural study was one of several views he made of the Fontana del Nettuno (Neptune Fountain) in Bologna. In contrast to Sargent’s more familiar formal portraits, the luminous and freely-painted plein-air picture here is more Impressionistic in style. Dating from c.1909, the watercolour, gouache, and pencil on paper is estimated at $50,000-70,000.

The other work at Skinner dates from 1913 and depicts an olive grove in San Vigilio, an Italian village on the shires of Lake Garda and is pitched at $35,000-55,000. 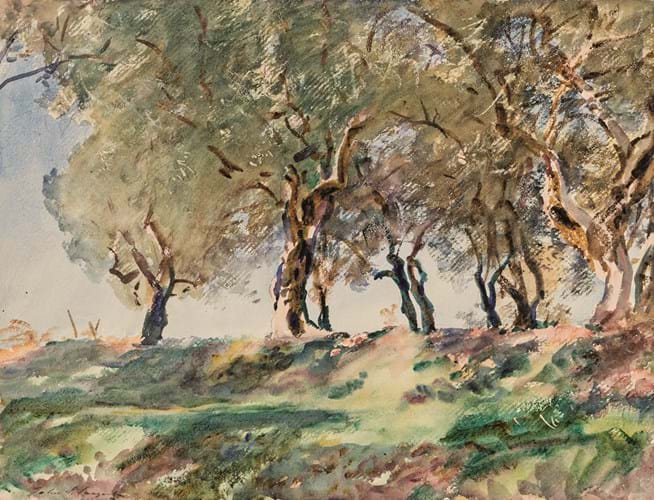 Olive trees and architectural studies were two of the most regular subjects for the pictures that Sargent during his time in Italy and Greece.

Such works were never intended for the commercial market and many were therefore unsigned. Some were given as gifts to friends while Sargent kept others for himself, although the Bologna fountain watercolour was part of the 83 works that his friend Edward Darley Boit convinced him to show in a joint exhibition at New York’s Knoedler Gallery.

All 83 works were bought as a whole by the Museum of the Brooklyn Institute of Arts and Sciences but this watercolour was later deaccessioned in 1926. It has since been in a Boston collection and has come to the Skinner auction from a deceased estate.

Sargent watercolours are not particularly unusual at auction but the best examples can easily fetch six-figure sums. Views of Venice in particular are highly sought after although the highest price for a work on paper for the artist was set by an earlier figurative picture – an 1883 portrait of Madame Roger-Jourdain laying in a park that made a hefty $2.4m (£1.35m) at Sotheby’s New York in May 2004.