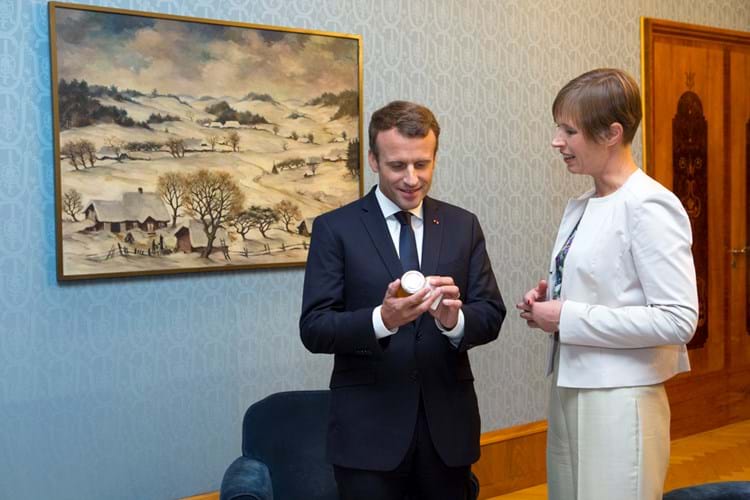 The Conseil National du Marché de l’Art (CNMA) in France has published an open letter addressed to a group of figures in the government, including the French President Emmanuel Macron (pictured meeting Estonian President Kersti Kaljulaid), the Prime Minister, the Minister of Culture and the Minister for Europe. The letter raises concern about France’s art market losing out to the UK after Brexit. Image: Annika Haas/EU2017EE Estonian Presidency via Commons Wikimedia.

The letter, signed by the chiefs of 10 associations representing dealers, auctioneers, authenticators and specialists, says that with the UK freeing itself “from certain devices carried by the European Union” this could “weaken the French position in a competitive art market economy”.

Whether Brexit will lead to any regulatory changes in the UK or tax cuts in relation to the art market remains unclear, but British Art Market Federation chairman Anthony Browne has previously highlighted its opportunities.

In 2017 he told ATG that BAMF wanted to ensure the government was aware of the significance of the British art market and look at issues relating to competitiveness that would improve the UK’s global position.

The CNMA letter in particular draws attention to areas including cultural property regulations, import licenses, VAT and the Artist’s Resale Right where the UK’s potential divergence from EU rules could lead to competitive advantages. It also raises a series of further issues relating to French domestic policy that create burdensome restrictions on art businesses.

The Conseil National du Marché de l’Art (CNMA) is an umbrella group of associations for the professional art market in France and the signatories of the letter include resident of auctioneers’ association SYMEV Jean-Pierre Osenat and president of Syndicat National des Antiquaires (SNA) Mathias Ary Jan.

It says that they would like to meet ministers to discuss a series of points which are outlined in the letter “to give us the conditions of competitiveness and an attractiveness essential to the durability and the growth of our sector in France”.

The demands made by CNMA focus on:

The letter concludes: “As professionals of the French art market, long engaged in the protection, safeguarding and enhancement of our cultural heritage, we are concerned by standards becoming more dense, maladjusted and complex in relation to the scale of our structures.”

The French art market represents 7% of the global total estimated at $63.7bn according to Dr Clare McAndrew’s The Art Market 2018 report. The UK’s art market stands at 20% and, while the CNMA letter recognises these figures, it states that that the French market remains the largest in continental Europe, three times higher than the German or Swiss markets.