The Beatles’ original management contract with Brian Epstein has been sold at Sotheby’s for £220,000 (plus premium). 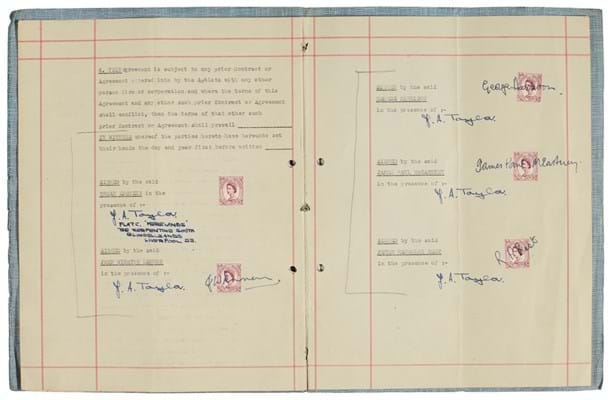 Signed by the band on January 24, 1962, the typescript document marks the beginning of the transformation of The Beatles into the band that would conquer the world. John Winston Lennon, George Harrison, James Paul McCartney, and Peter Randolph Best all signed although Epstein’s own signature is conspicuously absent.

With no prior experience of music management chose not to sign it explaining: “It was because even though I knew I would keep the contract in every clause, I had not 100 per cent faith in myself to help the Beatles adequately. In other words, I wanted to free the Beatles of their obligations if I felt they would be better off.”

Epstein entered The Beatles’ lives when they were in danger of losing momentum. They had recently lost a band member (Stuart Sutcliffe), and struggled to find gigs at new venues. The presentation, direction, and internal harmony of the band all owed a debt to their manager.

Gabriel Heaton, Sotheby’s Books and Manuscripts described the contact, estimated at £200,000-300,000 in an online sale that closed on July 9, as “a transformative document not only for The Beatles, but also for the 1960s and popular culture of the time.” It was being sold to benefit the charitable foundation established by Epstein’s publisher Ernest Hecht.

The January 1962 contract was only valid during Pete Best’s tenure. With the arrival of Ringo Starr it became void and a new contract was signed on October 1 ,1962. This second contract, which was to remain in force until Epstein’s death, was sold by Sotheby’s in 2015 for a premium-inclusive £365,000.

A collection of material relating to The Fab Four’s legendary performances in Germany came for sale by descent from Manfred Weissleder (1928-80), the founder of the influential Hamburg music venue Star Club. A lot comprising a contract employing The Beatles’ from April 13-May 31, 1962 for a weekly payment of Dm500 each, a letter to Epstein regarding arrangements plus four arbeitserlaubnis (work permits), one each for Lennon, McCartney, Harrison and Best sold for £28,000.