Auction houses Bonhams and Sworders, dealer association BADA, and the Goldsmith Company have all supported craftspeople and artists in new initiatives this autumn. Bonhams is among the companies to have supported craftspeople this autumn in a new iniative at The Venice Glass Week. Essex auction house Sworders is supporting The Slade School of Fine Art with an exhibition of works by students in its London gallery in Cecil Court.

The exhibition will run from October 17 -24 with works from 11 Contemporary art students from Slade.

The multidisciplinary show titled ‘WC2’ will comprise audio, video, photography, sculpture and paintings that reflect the WC2 postcode in which Sworders London is situated. Launching with a private evening view on October 17, 6-8.30pm, the works will be available for purchase during the event.

Sworders’ chairman Guy Schooling said: “Sworders takes great pride in its support for Contemporary art and culture and I am delighted at the prospect of sharing our workspace with some of the capital’s most exciting emerging talents.”

The Venice Glass Week and Bonhams Auction house Bonhams has awarded a prize during The Venice Glass Week – the first time it has given the award at the event which has been running for three years.

Venice Glass Week, founded in 2017, promotes the art of glassmaking, something which the city has been renowned for centuries.

The Bonhams prize awards a craftsperson or workshop with €1000. The winner was Barbini Specchi Veneziani workshop, for its project Materia Eterea – Ethereal Matter. “My work is produced in stoneware clay with wood ash glazes fired in a reduction atmosphere,” Cave said. “This gives the clay a toasty colour and makes the wood ash subtly different shades of blue to green, depending on the minerals that the tree drew from the soil.”

He called the course “fantastic, covering the entire process of making pots”.

Clay College was founded in 2017 to teach practical pottery techniques and promote the creation of British studio ceramic. Cave was one of 14 inaugural students and the graduating class was celebrated with a showcase in Brixton last month. 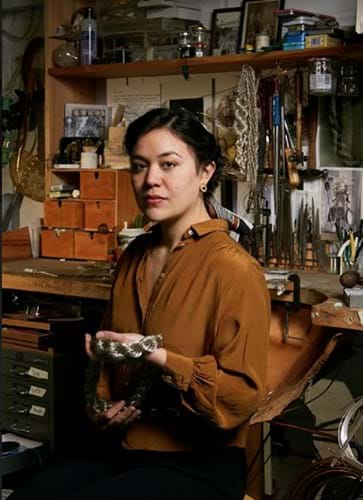 Lucie Gledhill is at the Goldsmith's Fair.

Lucie Gledhill, who won a commission through the Jerwood Makers Open 2019, is among the emerging designers, recent graduates and established craftspeople set to showcase their silver in the annual Goldsmiths’ fair, which runs from September 24-29 and October 1-6.

She works with precious metals, often weaving wire and making chains in processes inspired by making textiles. Themes for this edition of the fair include the mixing of precious metals with non-traditional materials like wood and resin.

The fair also features a programme of talks and events.