ATG’s selection of hammer highlights this week includes an ancient Cypriot jug that was bid four times over estimate. An Italian mid-20th century three-section painted metal screen or room divider from the apartment above the Lutrario nightclub in Turin – sold for £11,000 at Dreweatts.

Dreweatts of Newbury, Berkshire offered items from the storerooms of Pimlico Road dealership Lamberty Art & Design on October 15. The favoured offering was this mid-20th century Italian painted metal room divider that once furnished the apartment above the Lutrario nightclub in Turin. As an island sitting at the crossroads of eastern Mediterranean trade, ancient Cyprus was a melting pot of people and cultures. This colourfully painted 15in (37cm) Cypro-Geometric terracotta jug or oenochoe is modelled in the form of a fattened bird, with the trefoil mouth imitating the head and beak and concentric circles forming abstract wings.

Dating from c.750-600 BC its influences come from Phoenicia and Assyria: the figural decoration may represent an oriental deity who could commune with animals. It came for sale at Lyon & Turnbull in Edinburgh on October 15 from ‘a prominent British collection acquired 1980s’. No collection of Suffragette memorabilia is complete without the simple porcelain teawares designed by Sylvia Pankhurst and made by Staffordshire firm HM Williamson of Longton c.1909.

Decorated in the Suffragette colours of green white and purple, each piece carries a printed circular vignette with the initials WSPU and the image of a trumpeting angel surrounded by the national symbols of a thistle, shamrock and rose. The design was created by Pankhurst in advance of a Suffragette Exhibition in 1909 and was sold in fundraising events in sets of up to 22 pieces, with an original purchase price of 10s 6d per complete set.

The majority have been split up and sold individually over the course of the last century so this near complete service (of 19 pieces with one of the four cups chipped and cracked) is exceptionally rare. The Sholes & Glidden was not the world’s first typewriter but it was the first successful commercial typewriter. Principally the work of US inventor Christopher Lathan Sholes, it was developed with the assistance of fellow printer Samuel Soule and amateur mechanic Carlos Gladden. The New York firm Remington, an arms manufacturer seeking to diversify, acquired the patent in early 1873 and put it into production the following year.

The machine incorporates elements which became fundamental to typewriter design, including a cylindrical platen (roller) and the four-rowed Qwerty keyboard that remains the norm today. Visually it owed much to sewing machines of the period including a japanned case with floral and portrait vignettes and a cast iron stand with a treadle to operate the carriage return.

The first model had its flaws (it could only print upper case letters) and was very expensive at $125 but these issues were remedied in its later and cheaper successors.

This example of the Remington number 1, described by Cologne technology specialist auctioneer Auction Team Breker as ‘a milestone in the history of the office equipment industry’, was in fully restored and working condition. 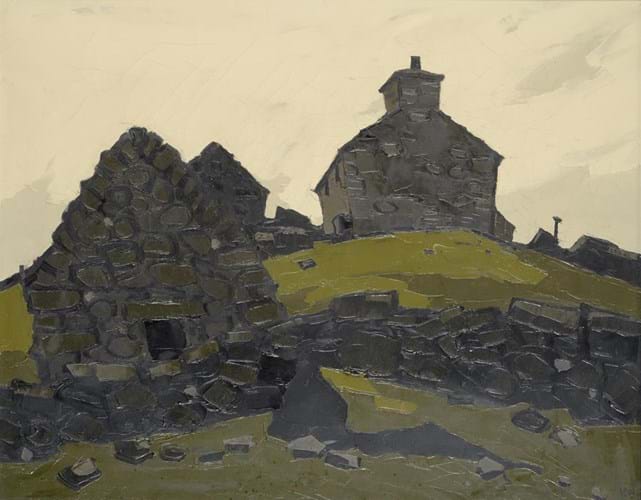 'Llanrhwydrys' by Sir Kyffin Williams – sold for £18,000 at Tennants of Leyburn.

The 'Mod Welsh’ painter Kyffin Williams (1918-2006) exhibited at London’s Thackeray Gallery for over 40 years. Bi-annual solo exhibitions were held there right up until the year after the artist’s death.

This typical 2ft x 2ft 8in (59 x 79cm) palette knife oil on canvas of an Anglesey subject, titled Llanrhwydrys, is undated but comes with a Thackery Gallery provenance. Estimated to sell for £8000-12,000 at Tennants of Leyburn on October 12 it continued the demand for trademark Williams pictures selling at £18,000 to an online bidder.